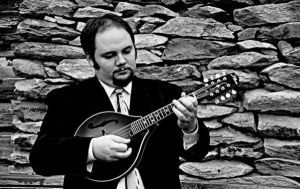 The Cafe welcomes Travers Chandler and his band “Avery County”. An historian schooled in the history of Bluegrass and Country, Travers is also a passionate original artist, with a dynamic stage personality and show that lays bare the very essence and soul of the music which he was born to.

His sound is best described as Honky Tonk Bluegrass.

The group came together in 2009 with the intent of preserving the legacies of bluegrass music’s lost heroes, while bringing these sounds to new audiences. A band that goes back to the original bluegrass formula, Chandler and his band offers listeners music thats fresh and exciting while offering a look into all sectors of human emotion. Before launching a solo career Chandler garnered much acclaim and IBMA accolades after stints with Danny Paisley and The Southern Grass, The Bluegrass Brothers, Karl Shiflett and The Big Country Show, Audie Blaylock and Redline and numerous others prior to this conglomeration. He’s even worked as a guest mandolinist for The Steep Canyon Rangers. They are now busily creating new music while delightfully hanging on to influences of the past.

Theirs is a raw, real sound- baptized in tradition and hardened in the honky tonks. The stage show is explosive, energetic and the centerpiece is his unique, driving, tremolo filled mandolin playing. His vocals are full of life, pain, sorrow, joy and redemption with dynamic phrasing.Their show is an intelligent presentation of classic bluegrass and country music that can draw in both new audiences and the most hardened of traditional music lovers. Playing from the heart and what seems to feed the crowd at the moment, the group can be five songs into a live set before the audience even knows what hit them.

They have already graced the stage at several major festivals including The International Bluegrass Music Museum’s ROMP, The Durango Bluegrass Meltdown, Pickin’ in the Pasture, O.A.T.S., Lil’ John’s Mountain Music Festival, and have made numerous radio and television appearances including PBS’ Song of the Mountains, and many appearances on historic WPAQ in Mt Airy, NC, leaving audiences buzzing everywhere they go.

2011 was a landmark year for TC +AC finding them on prestigious stages all over the country, garnering chart success with their sophomore release “State of Depression”, and surprising everyone by appearing in the semi-final nominations for IBMA “Emerging Artist of The Year.”

Heading into his fifth year as a solo act, Chandler has begun work on his fourth album as well as writing a biography on the late Charlie Moore.

“Bluegrass needs Travers Chandler. As seemingly more of the music devolves into a formula, Travers is the bitters in the beer, the rhubarb in the strawberry pie, the element of counterpoint that draws forth the desperate emotion that begs to be released from the form. He’s not the first… greats like Carter Stanley, Charlie Moore, and Buzz Busby were there before him… but Travers is for our time. Savor his music.” –Jim Beaver, WHUS Bluegrass Cafe