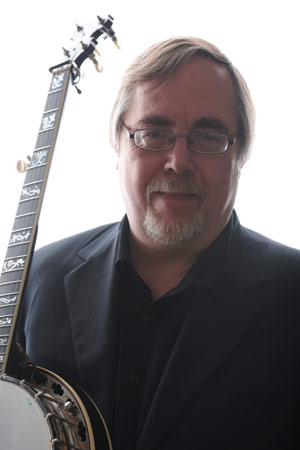 Tony Trischka has been nominated for a Grammy for his album “Double Banjo Bluegrass Spectacular” (Rounder, 2007), he produced Steve Martin’s recently Grammy nominated album “Rare Bird Alert”, his album “Territory” won an Independent Music award for Americana Album of the Year, and he garnered three IBMA (International Bluegrass Music Association) awards in 2007, including Banjo Player of the Year.

Tony Trischka has been recording and touring for the last 35 years. He’s been a key figure in opening banjo and acoustic music to wider influences. Tony has shared stage and studio with such folks as David Grisman, John Denver, The Boston Pops, William S. Burroughs, Hazel Dickens, Jorma Kaukonen, Ralph Stanley, and countless others. He’s spent 35 years recording for Rounder Records and has also authored and videoized a treasure trove of instructional materials. Tony can burn with a traditional fire, or step out into more progressive areas.

“Tony’s jovial wit and deep love of the banjo and acoustic music has infected and lifted me many times. Always a trailblazer, Tony plays the banjo like Tony Trischka. And many other people around the world would love to do the same.” –Jerry Douglas

“Wow what a CD. For banjo lovers everywhere a Tony Trischka recording is high on the list of acquisitions. When you check out the list of players who join Tony on this project you realize that it is a must have. Get it right now so you can start enjoying it immediately.” –Jorma Kaukonen

“I’ve known Tony Trischka for a long time, and I’ve always admired his inventiveness. Wherever he goes musically, he always keeps it interesting – and when it comes to bluegrass, he’s got a right hand that just won’t quit!” –Del McCoury