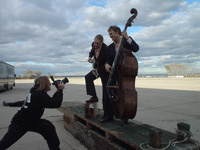 Oliver and Chris Wood grew up in Boulder, Colorado. Sons of a Poet and a Microbiologist, they both took up music. Oliver moved to Atlanta and became a southerner. Chris moved to New York City and became a Yankee. Now, after years of musical and geographical separation they have reunited. While in Atlanta, Oliver soaked up the roots of blues, the soul of the south, and found he had a talent for writing and singing songs. His band, King Johnson (named after Freddy King and Robert Johnson) toured mostly in the southern states. Meanwhile, Chris was living in Manhattan playing everything from free jazz to rock and roll. This is where he met his band mates to form Medeski Martin & Wood.