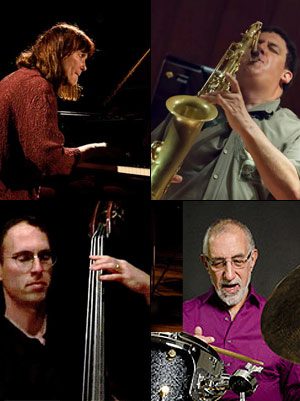 The Rob Scheps / Francesca Tanskley Quartet is a collaborative band, with four of the NY area’s finest jazz musicians and good friends.

Francesca Tanksley surprises. The internationally-acclaimed jazz pianist and composer, described as a “vivid presence” by Nat Hentoff, breaks through traditional expectations with the power of her musical vision. As Peter Watrous said in The New York Times in a review of one of her recent performances, “Ms. Tanksley reworked the vocabulary of McCoy Tyner as if she had taken just one small aspect of his style and developed it into a full language. She gave the music color, her harmonies and chording adding surprise to the performance.” Acknowledged as a fine soloist, composer, and accompanist with such notable groups as the Billy Harper Quintet and the Erica Lindsay Quintet, she has performed throughout the world with Howard Johnson, David Newman, Cecil Payne, Nick Brignola, Slide Hampton, Sheila Jordan, Jay Clayton, Clifford Jordan and Charles Davis.

Eliot Zigmund has been world famous as the drummer in the Bill Evans Trio for 4 years. Other credits include Chet Baker, Stan Getz, Lee Konitz, Michel Petrucciani, and many tours of Japan and Europe.

Bassist David Kingsnorth is a new voice on the scene. A strong, versatile player, he is busy freelancing in New York and New Jersey, and has performed with John Abercrombie, Roger Rosenberg, and Bruce Forman.