The Return of “The Book”: Roy Book Binder 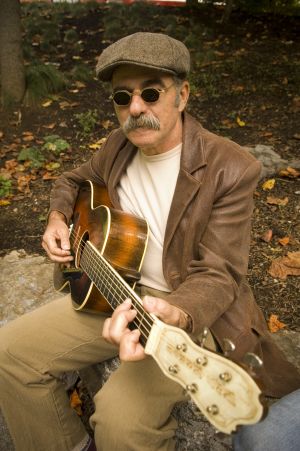 50 Years on the Road

The Singer-SongWriter, StoryTelling BluesMan returns to the Hudson Valley for a night of frightfully good music and humor.

This stirring folk/blues guitarist and vocalist has been playing country blues since the mid-’60s, when he began recording for Blue Goose. Greatly influenced by Rev. Gary Davis and Pink Anderson, Book Binder played in East Coast coffeehouses in the early ’60s, then began accompanying Rev. Davis on tours in the mid-’60s. He also played with Larry Johnson, Arthur “Big Boy” Crudup, and Homesick James. Besides constant concerts and tours, Book Binder’s made additional recordings for Blue Goose, as well as Adelphi and Rounder.

Book Binder began playing blues guitar while he was enlisted in the navy. Following his discharge from the military, he enrolled in Rhode Island Junior College. After a brief spell there, he attended New York’s New School for Social Research. Book Binder quit school in 1967, after he met the Rev. Gary Davis. Roy became Davis’ chauffeur, during which he took extensive lessons from the blind guitarist. Book Binder started his recording career slowly, cutting some singles for Kicking Mule and Blue Goose in 1968. In 1969, he toured England with Arthur “Big Boy” Crudup and Homesick James. The following year, he released his first album, Travelin’ Man on Adelphi. After the release of Travelin’ Man, he began touring America extensively.

Book Binder began playing with fiddler Fats Kaplin in 1973, recording Git Fiddle Shuffle the same year. Roy and Fats were a duo for three years, playing numerous concerts and recording a second album, Ragtime Millionaire in 1976. Following the release of Ragtime Millionaire, the duo stopped performing together and Book Binder bought a motor home, which became his permanent residence. Live performances became his primary concern after the release of Goin’ Back to Tampa in 1979. For nearly ten years, he toured the country in the motor home, driving himself from club to club, hitting numerous coffeehouses and festivals along the way.

Book Binder returned to recording in 1988, releasing Bookaroo! on Rounder Records. During the ’90s, he recorded regularly… releasing an album every two to four years… in addition to his constant touring.

“Roy has the goods: the original, the bare-knuckle, the low-down… blues. Who can say they were friends with the Rev. Gary Davis, Pink Anderson, and Robert Lockwood? And toured with Arthur Big Boy Crudup, Hot Tuna, JJ Cale & Bonnie Raitt? Roy can. He has the stories, the licks, and the mystery of timeless music in his fingers. He’s been featured on a PBS special, and interviewed by Terry Gross on ‘Fresh Air.’ He’s also a regular at Fur Peace Ranch, where he teaches along with Jorma Kaukonen. When he brings his ‘Tour Bus’ to town, a one-man blues-fest ensues. He plays and he entertains, feeding us music and stories, and the evening is a celebration for us all. We’re privileged to have Roy here to preserve-and extend—the tradition of great American blues music.” –James Hipp