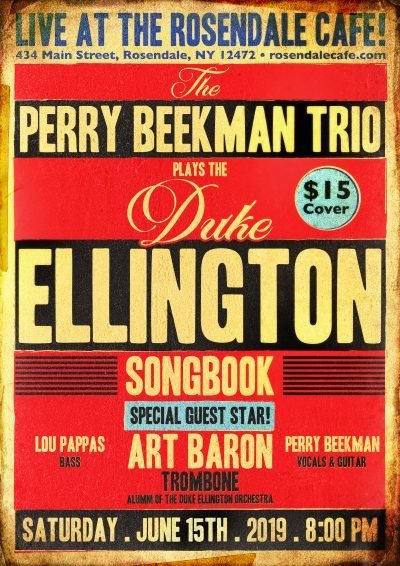 Perry Beekman is a rare commodity in the world of classic jazz. A gifted guitarist, vocalist and arranger, he brings a unique trio of musical talents to his passion for the songs of the Great American Songbook. When you add in his quick wit, smart sense of humor and impressive knowledge of the history of American popular song, you’ve got an uplifting, informative and highly entertaining musical experience. His three CD collections of Great American Songbook composers – Cole Porter (So In Love), Rodgers & Hart (Bewitched) and George Gershwin (‘S Wonderful) – have attracted glowing reviews. ‘S Wonderful made it onto the CMJ (College & Independent Radio) Top 40 Jazz Chart.

Art Baron joined the Duke Ellington band in August 1973 at the age of 23, the last trombonist Ellington ever hired. Previously he had spent time on the road working with Buddy Rich, Stevie Wonder, and James Taylor. Since then Baron has built a career as one of New York’s most distinguished jazz, studio, and pit trombonists. In 2006 he was a member of Bruce Springsteen’s Seeger Sessions Band, touring Europe and the US.  There he performed on trombone, sousaphone, penny whistles & mandolin. He has received several commissions, including Jazz at Lincoln Center.  His plunger work can be heard on such recordings as Bobby Watson’s The Year of the Rabbit (Evidence), Frank Wess’ Entre Nous (Concord Jazz), and Weird Nightmare: Meditations on Mingus. Art has been deeply involved with education, conducting workshop/clinics and guest appearances with a variety of age groups from pre-school to colleges and universities.

Lou Pappas began his career with the Colorado Springs Symphony, at the same time performing with such visiting jazz artists as Jay McShann, Bill Watrous, Tom Scott and composer Patrick Williams. As a member of the “Jazz Knights,” he performed at jazz festivals throughout the United States along with such guest artists as David Liebman, Byron Stripling, James Williams, Claire Fischer, Randy Brecker, Billy Cobham, Steve Turre and fellow bassist John Clayton. Lou regularly conducts workshops and master classes, including appearances at the 1996 IAJE convention, the International Society of Bassists conventions in 2001- 2005, the New York State Music Teachers Convention, and many high school, college and public school districts teacher’s workshops.

“It is rare to find a jazz guitarist that “burns” on the guitar and sings superbly. Such is the case with Perry Beekman.” Brandon Bernstein Just Jazz Guitar Magazine --- “Eschewing vocal gymnastics, Beekman let’s Porters lyrics and melodies speak for themselves. Considering his dual talents, John Pizzarelli might need to watch his back.” Dan Forte Vintage Guitar Magazine --- “Making old school new cool is a walk in the park for Beekman who is indeed real deal talent…” Brent Black Criticaljazz.com --- “Beekman is an engaging singer, and a terrific guitarist. His partners in music are perfectly simpatico with his approach to the material.” Joe Lang Jersey Jazz