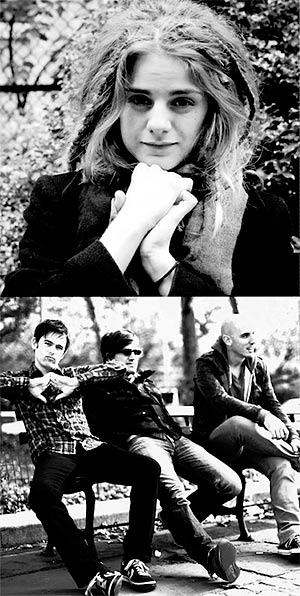 Also called The Catholics and the Pill, Stephanie Nilles and Zach Brock head up this traveling jazz/punk quartet from New Orleans and New York City. Their billed name seems to change, dependent on the demographic in the vicinity. They mostly tour in Europe, where the money is.

The whole band is Stephanie Nilles on piano and vocals, Zach Brock on violin, Matt Wigton on bass, and Fred Kennedy on drums.

Stephanie Nilles is a moody little pain in the ass. Predictably, she drinks and writes songs about drinking. She lives in New Orleans, which might not be the best idea.

Zach Brock is foxy and dangerous, even though he’s a jazz violinist. He collaborates regularly with Stanley Clarke, Grazyna Auguscik, and Frank Vignola. No, he will not lay down some sweet violin tracks for your indie rock EP.

Matt Wigton is a New York-based bassist, composer, and producer. He stays out of trouble working as an active sideman as well as writing and producing music for television. He talks frequently about how big he is, which leads his band to believe he is, in actuality, exceedingly small.

Fred Kennedy hits things for a living. All About Jazz has likened his “multi-phase pulse” to a “snarling beast.” He is a much-in-demand drummer on New York’s electropop, jazz, and indie rock scene; which is ironic, considering he is married and has a baby.
The Magic Number