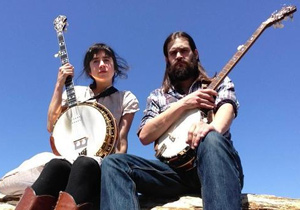 This is a quirky duo, influenced by old-time roots and featuring the high lonesome harmonies of banjo pickin’ songsters Kendl Winter and Palmer T. Lee. They perform both traditional and original music, often nestling-in somewhere between. Arkansas born and homesteading in Olympia Washington, Kendl is a solo artist on indie record label K Records and was one of the founding members of the popular string band The Blackberry Bushes. Palmer hails from Minneapolis, MN; and is the front man of high energy festival favorites bluegrass outfit, The Boys n’ the Barrels. The two met in early 2013 and began discussing the idea of collaborating. Shorty thereafter they hit the road with their banjos and an old guitar. A few months after the duet formed they teamed up with Dave Simonette of Trampled By Turtles to record their debut record “36 cents” released on Team Love Records. They are road warriors with a city folk front and back porch sentiment.

“Kendl Winter and Palmer T. Lee write about living and dying the way you’d write about waiting for a cake to bake.” –Sean Moeller, Daytrotter