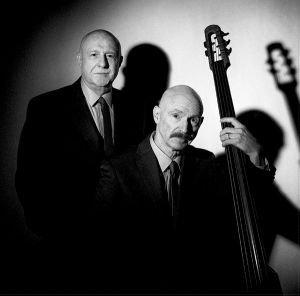 The Levin Brothers project is a reflection of a lifelong sibling friendship, mutual interests and shared passion. Growing up in Boston during the ’50s, Pete and Tony Levin were fascinated by “cool jazz”. Both were classically trained musicians, but exposure to recordings by the iconic bassist Oscar Pettiford and legendary French horn player Julius Watkins remained influential, even as they went on to global musical renown. Pete, who started out playing French horn before switching to keyboards, has graced hundreds of jazz recordings and performances by the likes of Miles Davis, Gil Evans, Jimmy Giuffre, Jaco Pastorius, Wayne Shorter, and Lenny White. Tony, for years the bass and Chapman Stick voice for Peter Gabriel and King Crimson, has contributed to thousands of rock and pop sessions for artists including Dire Straits, John Lennon and Pink Floyd.

Though Pete and Tony have crossed musical paths for over four decades – they both toured in Paul Simon in the late ’70s – they’ve never co-led a band and album project until now. The Levin Brothers Band is a return to that cool jazz style they grew up with, featuring original compositions with the catchy melodies, short solos, and the deep grooves they remember from the Oscar Pettiford recordings. In performances and even during the recording sessions, they wear suits and ties, part of immersing themselves in the genre of the music. It’s a labor of love. Joining Tony and Pete are saxophonist Erik Lawrence and drummer Jeff “Siege” Siegel.

“Imagine Josh Gibson and Babe Ruth getting to play on the same team. Playing in separate leagues their whole careers, they finally get to swing together in cooperation. That is precisely what we have on the “Levin Brothers” album; a player from the Jazz league has teamed up with one from the Progressive league, and they both show just how they can swing. The musical and philosophical camaraderie of Pete and Tony Levin is clear and clean. The adventurous approach of Tony on the cello, is integrated seamlessly with Pete’s sterling piano-organ musicianship. The compositions are brilliant, and the effect is exactly what the Levin Brothers hoped to create… that cool Jazz of the 1950s. So cool.” –Travis Rogers, Jazz Times, October 2014