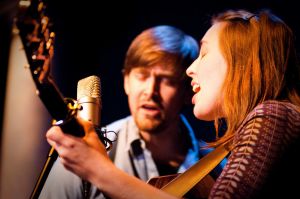 Their latest record is Silver Lining, of which Asheville Mountain Xpress says, “At every turn it sounds fresh and newly imagined.” Christopher Graham of Ear to the Ground writes that the album “…contains the best examples of tight male-female harmonies.”

Their debut record, Sun Will Shine, was released in 2009 to critical acclaim and was #2 for two consecutive months on Folk DJ Radio in 2010. Recorded live and mixed in a 1920s barn, the record is meant to pay homage to their live performances… full of the same energy and emotion the Honey Dewdrops bring to the stage. The album is a collection of songs that Laura and Kagey have written over the past two years, capturing “something haunting, melancholic and all-together charming” (Jeff Royer, Fly Magazine).

The Dewdrops are A Prairie Home Companion’s 2008 talent show winners, and were finalists in the 2009 Mountain Stage NewSong competition.

“The musical equivalent to a couple that finishes each other’s sentences.” –Shawn Underwood, Twangville.com

“I have admired the work of the Honey Dewdrops from the first notes I heard. They capture what is best of old time Appalachian music including the tight harmonies and beautiful melancholy tunes.” –Anne Williams, Host of WNRN’s Acoustic Sunrise in Charlottesville, VA