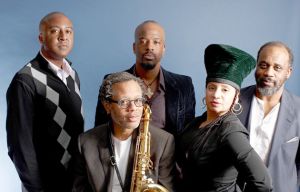 From the start of his career as a bandleader in the early 1990s, Don Byron has reveled in interpreting music by a wildly diverse range of artists and styles, including Duke Ellington, Igor Stravinsky, Mickey Katz, Raymond Scott, John Kirby, Sly Stone, Henry Mancini, Sugar Hill Records’ early hip-hop, Earth Wind & Fire, Herb Alpert, and R&B icon Junior Walker. Don Byron’s current project grows out of his in-depth studies of gospel music. Gospel pioneer Thomas A. Dorsey is a major inspiration, and Byron revisits some of the master songwriter’s works alongside other classics as well as lesser-known gems of the genre.

Byron says, “In the past few years I have listened more intensively to black religious music than ever before. Examining the specific blues styles peculiar to country, R&B, and rock led me to thorough studies of the blues based religious music of White and Black Southern Gospel. I am combining my own compositions with traditional Gospel pieces in a way I have not attempted before. This project coincides with a growth in my own faith and is for me a religious expression.”

The Don Byron New Gospel Quintet was launched in the spring of 2009 and had its world premiere at the Jazz Standard in New York. The band has since toured Europe and been received enthusiastically by audiences and critics alike.

The quintet’s performance at England’s Cheltenham Festival was broadcast on BC3 radio and described by critic Kevin Le Gendre in glowing terms:

“Fantastic gig! Anytime [Byron] does a new project he always explores the subject very deeply. He’s not just a jazz musician doing gospel – he is somebody who is really engaging with the subject matter as well, trying to absorb what’s in those lyrics by Thomas A. Dorsey, these very moving songs about his relationship with God, and just human relationships as well, and that really comes across in the gig. It is a very moving experience listening to it.”