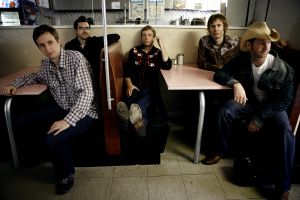 Led by Texas-raised Acadian, Nick Beaudoing, Brooklyn’s The Doc Marshalls have forged a reputation for wildly energetic live shows. Whether performing gritty honky-tonk, original Americana, or traditional Cajun two-steps played at breakneck speeds, these big city troubadours are determined to make converts of even the most country-shy souls.

Their versatile repertoire has taken them from indie rock clubs in NYC, where roots music is seldom heard, to rural Texas dancehalls and countless festival stages in between. A busy touring schedule has afforded them the opportunity to perform with the likes of Uncle Earl, Carrie Rodriguez, Bobby Bare Jr., The Mammals, and even reggae legend Burning Spear.

“It’s a damn shame that a band this good is self-releasing their albums. The Brooklyn-based Marshalls are Americana’s greatest unknown band, mixing accordion-heavy Cajun music with Parsons-esque alt-country, to create a sound both unique and infectious.” –The 9513 (Austin, TX)

“On their second record, ‘Honest for Once,’ the band moves seamlessly from tear-in-beer honky tonk, to Flying Burrito Brothers-esque alt-country, to raucous Cajun dancehall tunes that make damn near every other country record released in 2008 pale in comparison.” –Pop Matters

“Well-executed, frenetic Cajun music that will thrill fans of the genre, as well as the yet-to-be-converted.” –New York Magazine

“It’s hard to believe that the Doc Marshalls haven’t been signed to a record deal, but maybe it’s just as well. I don’t know what a record label could have done to improve on their second release, ‘Honest for Once’.” –Freight Train Boogie