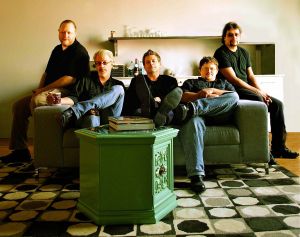 The band is called Steve Riley and the Mamou Playboys. The guy in the middle holds a button-box that squeezes like an accordion, but shouts hallelujah like a big brass band. The fiddle cracks wise and warm, the guitar falls off the edge of the earth, and the rhythm section is purring rumble like a Coupe DeVille of shark-fin vintage. It all flows as a liquid-smooth groove, topped with three heartfelt voices harmonizing in 17th-century French from the steamy sub-tropics.

The band began over twenty five years ago with a reputation for excellence. Their stunningly clean and cohesive performance of Cajun French music from the backwaters of Southwest Louisiana propelled them into the world music limelight early on, and by their third release, Trace of Time, had garnered them a Grammy nomination in the worldwide field of traditional folk music, another in 2004 for Bon Reve, in 2009 for Live at the New Orleans Jazz & Heritage Festival and again in 2011 for their latest release, Grand Isle.

From the day they started, they have gone from strength to strength. Never before in Cajun music has a comparable wealth of skills been brought to the same table.

When all that heart and all that skill focus on the revelry of a hot two-step, then turn on a dime and deliver an a cappella ballad, then play something that sounds like Howlin’ Wolf fell in lust with a Creole girl, you’ve found the most Cajun music you can find in any one spot. You’ve found Steve Riley and the Mamou Playboys.

The rest of the band is Kevin Wimmer on fiddle, Sam Broussard on guitar, Kevin Dugas on drums, and Brazos Huval on bass.