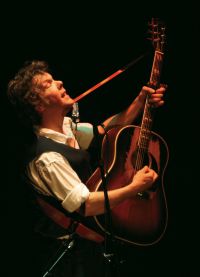 Nearly 28 years since breaking into pop consciousness with his second album Jackrabbit Slim and its infectious top ten single “Romeo’s Tune,” Steve Forbert remains a master of songs that offer clear-eyed insight, and plain-spoken, heartfelt eloquence. On his 429 Records/SLG debut, the well-traveled Nashville-based troubadour explores his ongoing fascination for Strange Names and New Sensations with characteristic wit, a sense of social consciousness, and the ever-present romantic optimism that has endeared him to two generations of folk/rock fans.

Beyond launching an exciting relationship with a new label, the vibrant collection finds Forbert in the midst of a true career renaissance at the wonderful age of 52… a time in his life he reflects upon wistfully on the sly narrative of the uptempo, horn-driven tune “Middle Age.”

This is his eleventh release of the decade, a roll that began with Evergreen Boy in 2000 and included four live recordings in addition to a Grammy nomination for Best Traditional Folk Album for Any Old Time: Songs Of Jimmy Rodgers – a tribute to “America’s Blue Yodeler” who was the first country music superstar (and a native of Forbert’s hometown, Meridian, Mississippi). In 2003, Geffen released Forbert’s Rock While I Can Rock: The Geffen Years; which featured material from two albums the artist released on the label, 1988’s Streets Of This Town and 1992’s The American In Me. In October of 2006, Forbert was inducted into the Mississippi Musicians’ Hall of Fame.