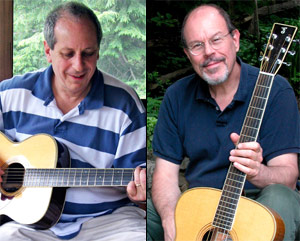 Stefan Grossman is a guitarist, educator and historian; and was a student of acoustic blues and gospel singer/guitarist Reverend Gary Davis. Beginning when he was 15, Grossman studied with Davis on weekends, spending eight to ten hours at his house in Harlem, absorbing all he could. In the early 1960s, Grossman formed the Even Dozen Jug Band and worked with the political rock band The Fugs before moving to Great Britain. In 1968, he co-founded Kicking Mule Records. Grossman’s solo discography goes all the way back to 1966, when he recorded “How to Play Blues Guitar” for Elektra Records. Grossman’s sessionography includes recordings with the Even Dozen Jug Band (which also included such future luminaries as John Sebastian, Maria Muldaur, David Grisman, and Steve Katz. Stefan concentrates his efforts these days on running his instructional video business, Vestapol Videos. His videos feature guitarists from Merle Travis and Chet Atkins to Dave Van Ronk and Brownie McGhee. He remains one of the world’s foremost authorities on acoustic blues guitar.

Steve Katz also studied guitar with Dave Van Ronk and the Reverend Gary Davis. There were many other young musicians around Greenwich Village during this time who were as obsessed with American roots music as Steve and Stefan. Many would look for a common ground in which to play music together and they found the common ground in “jug band” music. Along with John Sebastian, Maria Muldaur, and David Grisman they formed the Even Dozen Jug Band and recorded an album for Elektra in 1964. In 1965, Steve joined Danny Kalb in the Blues Project. They recorded three albums while together in their first incarnation. Steve then became a founding member of Blood, Sweat, and Tears, which won three Grammies and sold millions of records worldwide. After BS&T, Steve went on to produce two Lou Reed albums, both of which went into Billboard’s Top Ten. His last official band membership was with American Flyer in the mid-seventies. Steve then went on to become a vice-president of Mercury Records, where he produced the seminal Irish band, Horslips. Steve is in the process of writing his memoirs and doing concerts, both solo and with Stefan Grossman.
Stefan Grossman