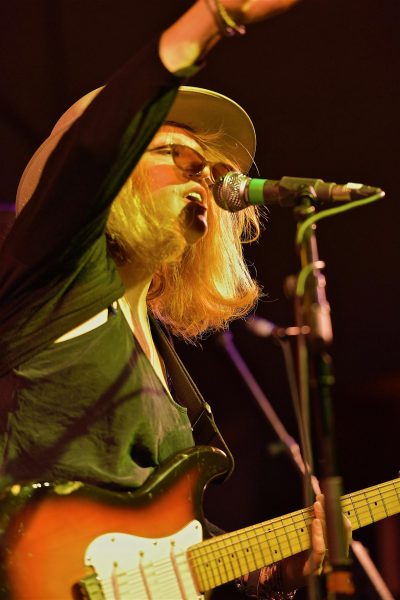 This special night will help launch Beki’s new album, “Blue For You,” recorded entirely in The UK over the past year!  Her bandmates have worked with the likes of Van Morrison, Argent, The Royal Philharmonic, Roy Wood, Steve Marriott, Lonnie Donegan and many more.

More about Beki Brindle  Guitars (lead and rhythm) and Vocals (lead and harmonies) New York Blues Hall of Fame 2014 Inductee, Beki Brindle was discovered at Indiana University by Rick Danko and Richard Manuel of “The Band,” while she was Blues Legend James “Yank” Rachell’s lead guitarist. A consummate player at an early age, Beki toured repeatedly with Jerry Lee Lewis, as his guitarist. A native of Indiana, she spent time living in Ireland where she shared the stage with Hot House Flowers, The Waterboys, members of U2 and Thin Lizzy, The Pogues and Francie Conway, as well as recording & touring with blues artists such as Carey Bell, Johnny Mars, Joe Louis Walker, Mary Stokes Band, Tampa Red, Fenton Robinson and more. She was also commissioned by Bono of U2 to create and run a blues workshop on Irish National Television. Although Beki is a renowned blues guitarist and singer, with a style that is a mix of classic and original blues, peppered with sounds from Chicago and The Delta, she was also the guitarist for the Warner/Reprise band Grace Pool, as well as releasing several albums featuring other guitar stylings.

In 2016, Beki’s latest blues album, “All Kinds of Beki,” released on NY Blues & Jazz label Random Chance Records, was much-lauded, including a stellar review from Living Blues Magazine (by Robert Cattaliotti). In November, Beki and her band recorded a “Live in The Studio” album in Staffordshire, UK, featuring original, classic and obscure songs by artists such as Willie Dixon, Ike Turner, The Band, Lightnin’ Hopkins and Yank Rachell.  Also included is the title track, written, produced and engineered by Russ Ballard.

The new album, “Blue For You,” promises both classic blues and originals, jam-packed with unforgettable, exuberant and raw performances.

"All Kinds of Beki is a first-rate contemporary Blues recording and is evidence that the dues Beki Brindle has paid, have come to fruition." - Robert Cataliotti, Living Blues magazine. "Seeing the Beki Brindle band is like having really great tapas. Real variety, really well presented. Beki is an exceptional guitarist with an expressive and rich singing voice. She and her group of consummate musicians both pay homage to the rich and deep musical past which inspires them and create unique and original material. Their live performances are instantly enjoyable and timelessly memorable.”- Phil Lightwood-Jones Lamb Bristo from the - Boom Boom Club says of The Beki Brindle Band - " The truth is, I love the band and am looking forward to having them back at the Boom Boom. Beki is a powerful talented performer who keeps your attention from the moment she hits the stage until the very last note and you then you want more. If you like talent, energy and being thouroughly entertained, then the Beki Brindle Band is what you want to see. I look forward to the return gig.xx" "Beki Brindle and her UK band first appeared at the Pokey Hole Blues Club in Lichfield at a one-off mid-month date in November. The reception from the Pokey crowd was so good that the band were immediately rebooked to play at a main Friday night gig. The result? Queues outside waiting to get in way before the official opening time, a packed house absolutely blown away by a great performance from this fantastic Blues Lady and her rocking band. Great music from great musicians. And are they coming back to the Pokey? You bet your life they are….!..”- Norman Hood (Pokey Hole Blues Club