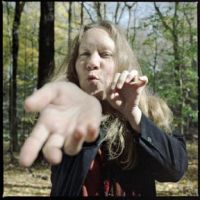 Sloan Wainwright performs songs from new CD Rediscovery. Contemporary folk-pop singer-songwriter Sloan Wainwright – youngest sister to folk-music luminary Loudon Wainwright III and aunt to Rufus and Martha Wainwright – has just released her newest CD ‘Rediscovery’. This new work from the artist is a collection of hand picked cover tunes, a musical rediscovery of, and reconnection to, ten songs that have inspired and influenced her deeply.

Stand out tracks include the fan-favorite ‘Ring of Fire’, a poignant version of John Lennon’s ‘Love’ and a stark and soulful interpretation of Neil Young’s ‘After The Gold Rush’.

Sloan will be bringing her rich contralto, her trusted musical collaborator and guitar-player Stephen Murphy and percussionist Cadence Carroll to the Rosendale Cafe stage for a summertime CD release celebration. The evening will feature live performances from Rediscovery as well as both updated and classic versions of her self-penned songs culled from an impressive, and critically acclaimed, discography.

Audience members often describe her personal appearances as forceful and uplifting. Defying standard categorization, singer/songwriter Sloan Wainwright consistently demonstrates her easy command of a variety of American musical styles: pop, folk, jazz and blues, held together by the melodious tone of her powerful voice. The musical end result is a unique and soulful hybrid.

“…Sloan Wainwright, whose regal voice could fell a redwood….” –The Boston Globe

“…one of those singers whose performance is a force of nature.” –Sing Out Magazine

“… earth mother voice that she pours into unexpectedly sensitive blends of folk, jazz, blues and funk.” –The New York Times