Sharon Katz and The Peace Train, with Wendy Khethiwe Quick 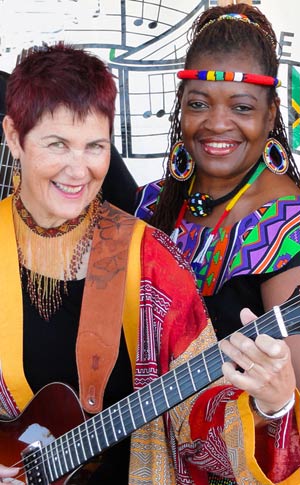 Sharon Katz made history in her home country of South Africa back in 1993 when she formed the country’s first-ever, 500-member multi-cultural and multi-lingual performing group and staged a production called “When Voices Meet”.

Then Sharon rocked the nation with her concert tour, “The Peace Train”. She took 150 performers, including her friends Ladysmith Black Mambazo, on tour by train, giving concerts at every stop along their route. As the performers played, sang and danced to promote a peaceful transition to democracy in South Africa, TV and radio crews rode on board The Peace Train and broadcasted all the events to the nation. At each stop along the route, they performed their concert and encouraged people of all races, cultures, ages and political affiliations to put down their guns and hostilities and to prepare for the country’s transition to a peaceful democracy. The performing group became known as “The Peace Train” forever more, and all the world watched as Nelson Mandela became South Africa’s first democratically elected President a few months later.

With violence, intolerance and problems in schools becoming a daily concern in America too, Sharon has established a base in the U.S. She’s doing workshops and concerts in schools, universities and community centers across the country. She’s also forming Peace Train projects in many cities.

Singer and dancer Wendy Khethiwe Quick has been performing with Sharon Katz and The Peace Train for the past three years. After many years of travel in West Africa, in 2008 Wendy began traveling with The Peace Train to South Africa and in 2009 she spent two months in South Africa working side by side with Sharon building the school in the impoverished area of KwaNgcolosi. In her previous career in law enforcement in Philadelphia her home town, Wendy founded a youth empowerment project designed to reduce violence and educate children about gun violence. At the same time Sharon was founding The Peace Train in South Africa, and the two singers and educators were destined to meet and work together. Both were using music and dance to get their message across. Wendy now teaches children and travels the world with Sharon Katz and The Peace Train. She is an ambassador of peace, an extremely talented singer, a poet and a dancer.