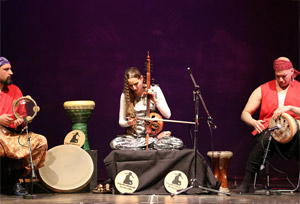 Raquy Danziger is a celebrated performer, teacher and composer known worldwide for her expertise on the dumbek, the Middle-eastern hand drum. Hailing from unlikely Western roots, Raquy has distinguished herself as a unique phenomenon and earned a place of renown in the genre. In demand on several continents, she has collaborated and performed with several of the most famous Middle Eastern drummers in the world.

Now based in Istanbul, Turkey; Raquy specializes in a style know as the Turkish Split Hand technique. Her study, practice, and perfection of this technique with her teacher Bunyamin Olguncan and other master Turkish drummers has helped her realize a mission: to incorporate what she has learned into her original music and share it with audiences and students world wide through performances, workshops and instructional materials.

Raquy has had the honor of performing several times in Egypt as a soloist with Said El Artist (The Egyptian “King of Tabla”) and his drumming orchestra at the Cairo Opera House, the Alexandria Opera House, the Cairo Citadel, the historic Ewart Hall in downtown Cairo, and the Great Hall in the Bibliotheque in Alexandria. In 2005 she was the recipient of the Meet the Composer grant, which enabled her to perform her original composition with Said El Artist’s orchestra in Egypt. Raquy has appeared on Good Morning Egypt, Leila Kebira, O TV, the Culture Channel, and Turkish Television, and has been interviewed on Al Gezira.

In addition to the dumbek, Raquy also plays the twelve-string Kemenche Tarhu, a rare and exotic bowed instrument designed after the Iranian spike fiddle. She currently studies the kemenche with Iranian kemenche master Arlsan Hazreti in Istanbul. Raquy has composed many melodic pieces for the kemenche, which she plays in her concerts and which can be heard in her albums. She is currently compiling a book of her melodic compositions.

Raquy’s infectious enthusiasm for Middle Eastern music has attracted students from around the globe. She has released three dumbek instructional kits each of which includes a book, a DVD and a CD. These have helped to spread “Dumbek Fever” far and wide, opening new horizons for students, a number of who often perform with her as “The Messengers”. Raquy hosts drumming retreats for her students in the Catskill Mountains, NY, the Sinai Desert in Egypt and Istanbul, Turkey, and taught a course in Arabic Drumming at the American University of Cairo. She has also created her own line of custom-designed dumbeks that are available through her online store – The Raquy Drum Store.

Performing this evening will be Raquy Danziger on king kemenche and darbuka, Rami El Aasser on darbuka and saz, and Joacim Colon on darbuka.