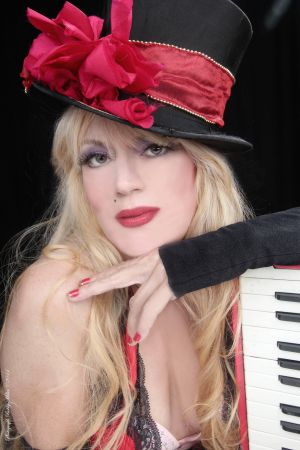 Phoebe Legere and her Bon App�tit Band will be cooking up taste tantalizing beats at the Cafe.

Phoebe Legere plays 7 instruments and has been profiled on National Public Radio, HBO, A&E and Charlie Rose. She is a passionate entertainer who combines grooves from Louisiana with New York City funk! Come early for a Cajun dance lesson from Legere… then try out your steps to the soul stirring sounds of Phoebe Legere and Bon App�tit! The Bon Appetit Band features Mick Oakleaf on drums, spoons, and rubboard; and Tom Fitzpatrick on bass.

Phoebe Legere is a songwriter of Acadian and Abenaki descent. Graduating from Vassar College, Legere went on to study with John Lewis of the Modern Jazz Quartet, Morton Subotnick and Ira Newborn. Legere studied composition at the Juilliard School, and film scoring at NY University. She plays piano, accordion, cello, Native American flute, organ, buffalo drum, synthesizer, guitar, invented instruments, and sings. Legere incorporates painting and poetry in her live performances, she produces and arranges her own music, and she creates her own videos. Legere has led seminal East Village bands Monad, 4 Nurses of the Apocalypse, and Swingalicious. She had her Carnegie Hall debut and was signed to Epic Records when she was 16. Her original song “Marilyn Monroe” was a hit on college radio in 1990, and her accordion song “Amazing Love” was in the Top 40 on Adult Contemporary in 1997. Legere has starred in independent cult films, including Mondo New York and Toxic Avenger 2 and 3. Legere opened for David Bowie on his national tour in 1991. She was nominated for the Pulitzer Prize in music in 2000. In 2002 her musical work about Queen Weetamoo, her Native American ancestor, won the New York State Council of the Arts grant. June 1st, 2014 she received the prestigious Acker Award for Excellence in the Avant Garde. Legere is the Founder and Executive Director of the Foundation for New American Art and NY Festival for Gifted Children…. a 2 week free summer camp for low-income children of the inner city. Legere is head writer and host for Roulette TV, a NYC show about experimental art and music. In 2013 Legere created the Shamancycle, a 15 person giant Eagle bicycle that runs on Alternative Energy. Legere will perform on the moving stage of the Shamancycle at the San Francisco Makers Fair on May 15. Legere has released fifteen CDs of original music, and has appeared on National Public Radio, CBS Sunday Morning, PBS City Arts, and Charlie Rose. She has sung at Carnegie Hall, Lincoln Center and at the Congres Mondial Acadian. Legere was featured singing her original song “Hip Hop Frog” on HBO March 23rd. Her CD Acadian Moon with her cousin Ray Legere was played on 40 college stations in Canada. Her recent musical Shakespeare and Elizabeth ran for 3 sold out weeks Off Broadway. Legere just received commission from Theater for the New City in NYC to write a new musical about French-Canadian immigrants to the US in the 20th Century.

“Legere is an expressive and versatile singer whose voice ranges from a dark and earthy alto to a gorgeous dazzling high soprano. She combines intelligent lyrics and a fusion of French musette, Cajun, pop, rock, folk and jazz into a ‘roots alternative’ stew.” –Washington Post

“A charismatic showman who works the audience with the razor edged skill of a veteran comic; poking, teasing, and caressing it with clever turns of phrase both musical and verbal… She plays the piano with enormous authority, in a style that encompasses Chopin, blues, ragtime, bebop and beyond; and she brings to her vocal delivery a four and a half octave range; and an extraordinary palette of tonal color and meticulous phrasing.” –New York Times