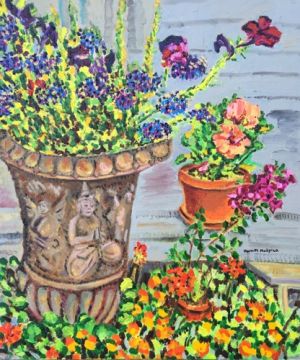 An opening reception from 2:00pm-4:00pm, for artist Daniel Malpica’s show of work entitled “Oil Paintings – Assorted Images”, displaying in the Cafe during the month of May 2017.

Daniel Malpica grew up on the upper west side in New York City. He went to public schools where he took an interest in the fine arts at a young age. In sixth grade (1977), he had an art teacher who introduced him to batiking. Working with batiks (cloth, dyes and wax) laid down a foundation for Daniel’s understanding of shape, form, and strategizing with layers of color and color combinations. It was around the same time that Daniel began studying oil painting privately with a local artist in New York City, and he enrolled at The Arts Student League of New York. He spent many Saturdays at The League drawing still life subjects and nude figures, and received an honor award for a still life pastel shown at their annual exhibition at the age of fourteen. Simultaneously since early childhood, Daniel studied music and excelled in his piano skills. Due to an unfortunate accident in Junior High School, limiting the use of his right hand, he decided to apply to LaGuardia High of Music and Art for Fine Arts rather than music. He continued at The Arts Student League for many years while also studying fine art at The LaGuardia High School of Music and Art. He graduated from Music and Art High School at the top of his class and continued his studies as a fine art major at SUNY Purchase for several years.

Half way through college, Daniel had a change of heart and decided to pursue a career in health sciences, ultimately graduating from NYU with a Bachelor of Sciences degree for physical therapy in 1994. Since then, he has been a practicing physical therapist working mostly in the educational realm, with children and adults with disabilities. In the year 2017, he started a new career path working in utilization management with United Health Group – OPTUM, in Kingston NY. His focus on the science of rehabilitation blends well with the arts. Art is a therapeutic tool for people, the artists and the observers, to get stronger physically, cognitively and spiritually.

In 2003, he and his partner, Peter Oellers, found a second home in Stone Ridge, NY, where he began associating with local artists in the Hudson Valley. Becoming part of an artist’s community served as an inspiration to deepen his practice in the arts.

To further his artistic pursuits, Daniel set up a studio at home where he could focus on painting. Utilizing a fully equipped art studio made his studies more accessible and efficient.

Since the summer of 2010, Daniel has shown his work at every opportunity, including venues in the Hudson Valley and in New York City. He continues to work in oil painting focusing mainly on still life subjects, landscapes and animals. Daniel is always varying the scope and scale of his work, using smaller, medium sized and larger canvases consecutively. He prefers to work directly from life but at other times, will vary his approach using supportive photography and even fantasy and memory.