Opening art reception and remembrance of the late Jorge Jaramillo 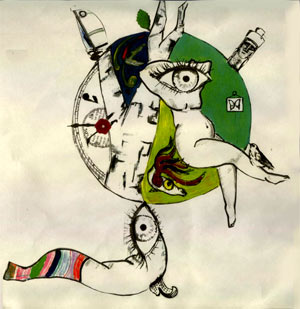 The following is from Rosendale Cafe co-owner Mark Morganstern:

A most beautiful soul passed on December 29, 2014. Jorge Jaramillo died of an aggressive cancer, but he faced death as he did life, on his own terms: with courage, compassion for others, and even humor.

In the last days, he cared for us as we tried to care for him. He held our hands firmly, patted our backs, and made us smile as he persevered through this last stage. The transference of love between us, his family and friends, was awe-inspiring.

Jorge was a man of many talents. His stone work and carpentry skills were well-known and appreciated throughout Ulster County. He was also a gifted multi-media artist who always seemed to be designing something, and when creativity struck, he was off and running. His inspirations led him anywhere and everywhere: from painting on canvas, wood and metal, to sculpting clay, to carving wood and stone, and to building beautiful and unusual furniture from found objects and resourced materials. He even built an 8′ Moai from wood and plaster when he became intrigued by the stone giants of Easter Island. Once an idea took hold, there was no stopping him, and the results were always stunning.

Enthusiastic about the Colombian culture he came from, he and his wife Pam originated the Salsa lessons and dances enjoyed by many at the Rosendale Cafe. His contribution to teaching Latin dance and sharing its pleasures endures.

A retrospective of his artwork will be displayed at the Rosendale Cafe for the month of February, 2015. On Sunday, February 8, there will be an opening to celebrate his work. This will also be a gathering in remembrance of Jorge and to honor the time we had with him.

The Solstice is less fulfilling this year, even though we gain precious minutes of light each day, as we’ve lost the shining glow of warmth, friendship and deep humanity Jorge cast on those who were fortunate enough to know and love him. Viaje eguro…hasta que nos veamos nuevo.

Jorge is survived by his wife, Pam, his daughter, Natalia, and a large extended family in Colombia who will miss him very much.