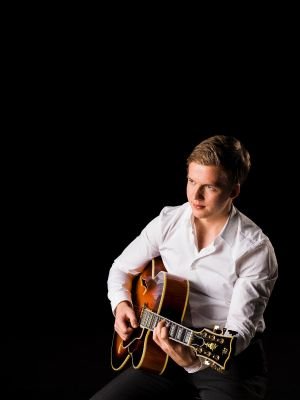 Olli Soikkeli was born in Nurmes, Finland in 1991, and is now based in New York City. He started playing guitar at age of 12. After a few years of playing, Olli was introduced to the music of the great Django Reinhardt and Gypsy Jazz has been his main focus ever since. Soon Olli was playing in jazz clubs and festivals all over Finland. After touring around Europe with musicians such as Paulus Schafer and Arnoud Van Den Berg, Olli decided to move to New York City in 2014. There, Olli has played legendary venues such as Birdland Jazz Club, Blue Note, and the Lincoln Center.

In 2011 Olli recorded his first album, “Trois Generations” with Hot Club de Finlande and Vitali Imereli, and in 2012 he recorded his second album “Kouvola Junction” with Paulus Schafer and Arnoud van den Berg.

“Olli Soikkeli, is a riveting Finnish guitarist who combines astonishing dexterity and speed with pure soul in a way that places him among the worthiest current day successors to the legacy of the great Django.” –The Wall Street Journal

Cesar Garabini writes: “Hello to everyone! I am an Italo-Brazilian guitarist. I was born in Minas Gerais, Brazil on the 25th of August 1987. I lived in Brazil until the age of 5, when I moved with my parents to New Jersey, USA. There I went to school and learned English. In 1998 at the age of 10, my parents and I moved back to Brazil where I continued school, perfected the Portuguese language, and had my first contact with Brazilian music. In 2005 at the age of 17, I moved with my parents to Florence, Italy, where I learned Italian, worked in countless different jobs, and started practicing the classical guitar as a hobby.”

“Since I first heard the sound of the guitar, it has always been my passion, and since the beginning, everything I know in music was discovered by myself through a lot of listening, jamming, and performing. In 2009 I finally started putting together samba, bossanova and chorinho bands in Italy. I have performed in most music bars, restaurants and stages in Florence, and in many other venues throughout Italy. In February of 2011, I decided to come to New York City to expand my musical knowledge.”

“Now, I am playing in many NYC venues with many formations such as solo guitar, guitar+pandeiro, guitar+singer, guitar+mandolin/flute, in samba, choro, and bossa nova bands.”
Olli Soikkeli