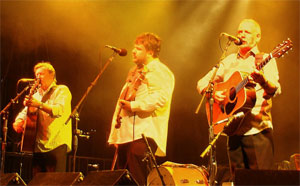 Thirty years and stronger than ever…

One of Scotland’s most popular folk bands features great vocals and tremendous three part harmonies. Guitars, mandolin, fiddle, bouzouki, whistles, bodhrans, banjo and good humour are all part of the entertainment. They have received Gold and Silver disc awards from the Scottish Music Industry Association, and regularly sell-out their shows at the Edinburgh Festival Fringe.

The band is Ronnie MacDonald, Grant Simpson, and Dave Gilfillan.

They have recorded 15 albums and are constantly adding new material to their show, with the latest album Tak a dram afore ye go proving yet again very popular with fans all over the world. “The album is offered in the spirit of enjoyment, and in that it succeeds superbly” –Alasdair Maclean, The Scots Magazine, on the band’s recent live album Edinburgh Toon.

North Sea Gas’ previous album “Rosslyn” received wonderful reviews from folk magazines, newspapers, etc… including Dirty Linen (USA), the Scots Magazine, and The Living Tradition. Their show, in the same way as their albums, consist of traditional, contemporary and self-penned material all put together in a style of their own. This proves popular during their regular tours of Scotland, America, Canada, Germany, Austria, and many other destinations every year. They also have numerous TV and Radio appearances on both sides of the Atlantic, including Late Night Saturday and Woodsongs Old Time Radio Hour, one of the biggest radio shows of its kind in the USA.

In 2008, they recorded for Chinese television, with an estimated audience of 800 million… a highlight of any bands career!

December 2009 saw the band playing in Istanbul, Turkey, for the British Consulate St Andrews Ball… and they were invited back in 2010.

Besides the band’s regular tours abroad in the last few years, they have endeavoured to take their show to the theatres, art centres, and community halls around Scotland. Touring and seeing their native land is something the band really enjoys.

We could say more but put simply, North Sea Gas is a highly entertaining Scottish folk band who have an ever-growing fan base, ranging through all age groups, thus giving the “Gas” show a wonderful atmosphere.