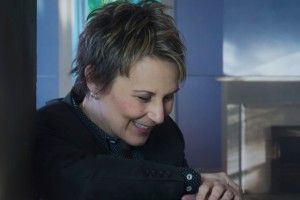 In a Nashville bookstore, to the tune of steam hissing from a latte machine and laptop taps of nearby browsers, she speaks in a low voice, yet communicates urgently. Her voice never rises. Her music never rattles rafters or crashes like cymbals toward the high notes in a power chorus. Her tempos shuffle and trudge more than they dash.

And her songs? They’re about as idiosyncratic as anything in the wide world of “popular music.” They’re painfully personal, especially on Trouble and Love. Yet they somehow infiltrate the souls of her listeners, no matter how different the paths they’ve followed through their lives.

Those songs weren’t so much written as harvested by Gauthier. Though she lives not far from the hit-making mills of Music Row, she admits to knowing nothing about how to write on command. She says, “I have to be called to write. The call comes from somewhere I don’t understand, but I know it when I hear it.”

“To be affected by these songs, you don’t have to know anything of Gauthier’s backstory (Louisiana orphan addict chef turned sober troubadour), the respect she commands across gender lines in the Americana scene, or the heavyweight catalog she’s built out of unflinching introspection and Southern Gothic-shaded storytelling.” –NPR Music

“…Louisiana-raised Mary Gauthier has become one of Americana music’s most admired artists… across the U.S., and in her regular tours around the world.” –Wall Street Journal

“Every tune is a rough gem of melody, misery and economy, as Gauthier excavates romantic wreckage like an archaeologist telling the story of a fossilized love.” –Rolling Stone