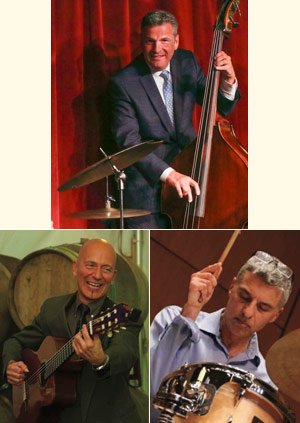 Jazz bassist Martin Pizzarelli brings guitarist Mark Sganga and drummer Jonathon Peretz for an evening of music from Bucky, Bossa Nova, and Beyond!

Martin Pizzarelli is a jazz bassist who has worked with brother John Pizzarelli for 25 years, and from there worked with 7-string guitarist Ed Laub, and 7-string guitar master (and father) Bucky Pizzarelli. For the past two years, Martin has been working and recording with Brazilian drummer Duduka da Fonseca (of Jobim fame) as well as with international Fingerstyle Guitar Champion Mark Sganga.

Mark Sganga has enthralled audiences from Stockholm to Kuala Lumpur to the Thredbo Jazz Festival in Australia. He’s been featured on tours and recordings with Indian violin virtuoso Dr. L. Subramaniam, alongside Larry Coryell and Herbie Hancock, and has played opposite the legendary Taj Mahal. He’s performed numerous times at Iridium in NYC, often as the guest of the legendary Les Paul. He is a repeat featured performer and judge at The Indiana State Fingerstyle Guitar Competition, as well as a main stage performer for several years at the reputable Walnut Valley Guitar Festival in Wichita, KS, where he won first place in 2009.

Jonathon Peretz is known in the music industry as being a drummer of a wide range of musical styles from jazz, to pop and rock, from Caribbean to Brazilian rhythms, from standards to classical. He’s worked closely with an impressive array of musical masters, including the late trumpet giant Maynard Ferguson, and Ben E. King. From 1993 to 1995 he was a member of the legendary Blood, Sweat & Tears with David Clayton-Thomas, and then moved on to tour the world for 2 years with international pop sensation Ricky Martin.
facebook event page