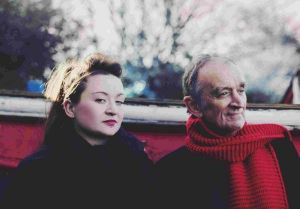 It’s nearly 50 years since Martin Carthy recorded his iconic, eponymous first album and more than 20 years since his daughter Eliza Carthy’s recording debut. Throughout their respective careers, both have toured and recorded with many others. For instance, Eliza shared the bill with her acclaimed mother, Norma Waterson, on their award-winning Gift album in 2010. However… finally… this trail-blazing dad and daughter have made their first ever duo album, The Moral of the Elephant which was released last year.

Twenty years ago, the then teenage Eliza Carthy joined her celebrated parents Martin Carthy and Norma Waterson on the first Waterson: Carthy album. Since then, she has recorded the classic LP Gift with her mum, and now comes the debut set with her dad. The result is brave, and anything but predictable. No other musicians are involved, as the duo match their solo and harmony singing against fine, sparse guitar work from Martin and his daughter’s fiddle-playing. They work together with an ease and delight that’s at times reminiscent of Martin’s work with Dave Swarbrick, switching from traditional songs including the thoughtful The Queen of Hearts, which Carthy recorded on his solo debut 49 years ago, to unexpected new songs. Best of all is the quietly poignant Happiness, written by Nick Drake’s mum Molly, and finely sung by Eliza.

The good Doctor Martin Carthy and his twice Mercury nominated daughter Eliza Carthy, join forces to perform songs from their first duo album ever, a new CD of traditional material entitled THE ELEPHANT, to be released in May 2014 on Topic Records.

Martin is a legendary ballad singer and guitarist who has influenced a generations of artists, including Bob Dylan and Paul Simon, while Eliza has been twice-nominated for the Mercury Music Prize and a multiple-award winner at the BBC Radio Two Folk awards.

“From the Royal Albert Hall to the Rosendale Cafe, Martin and Eliza Carthy bring the gift of their traditional music. This is a drop whatever else you’re doing and hear this rare musical offering on this warm April night.”
–Cafe Guide