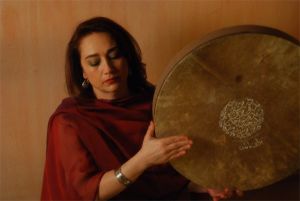 Mamak Khadem was born in Iran, at a time when tides were changing. She was part of the Children’s Choir for National Radio and Television of Iran, but it wasn’t until after the Iranian Revolution that her passion for singing waxed. Inspired by works of master musicians, she seized every opportunity to further her vocal art, regularly traveling back to Iran to study with some of the finest Persian vocalists and masters. She also benefited from the study of classical Indian singing tradition at the Ali Akbar Khan College of Music in Northern California, and from singing with the Los Angeles based Balkan choir Nevenka.

Called “…one of the wonders of world trance music”, by The Los Angeles Times; Mamak Khadem captivates audiences by blending her roots in the ancient poetry and music of the Persian masters with a bold and revolutionary new sound. By nature, she is a nomad, one who thrives on open spaces. By occupation, she is a bridge, one that connects geography to lore. In music, she is open to cultural influences, but she has chosen the classical Persian style as her base. Formerly of the sensational cross-cultural fusion ensemble Axiom of Choice, Mamak weaves a canopy, both simple and rich, for a stunningly emotional and spiritual musical experience… one that inspires new listeners to embrace cultural diversity, and an awareness and appreciation of Persian arts and culture through a blending of old and new.

Inspired by the poetry and paintings of Iranian artist Sohrab Sepehri, Mamak Khadem’s new project “A Window to Color” shares a message of peace and understanding, through an exploration of what is most sacred in the natural world, as expressed in Sepehri’s contributions to the cannon of Persian literature, culture, history and traditions. Like Sepehri, Mamak Khadem seeks to explore the intersections of Eastern and Western traditions. Collaborating with traditional performers from Iran as well as world-aware instrumentalists from the West, Mamak hopes to inspire people around the world, particularly the young, to contemplate, observe and celebrate the value of nature and the environment. Mamak’s first solo album “Jostojoo (Forever Seeking)” features some of Mamak’s favorite Persian poetry blended with carefully chosen melodies rooted in the traditions of Armenia, Greece, Turkey and Iran.