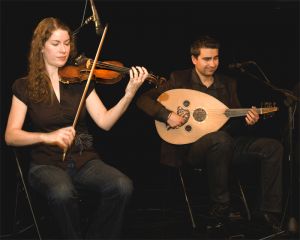 Having performed together in the Maeandros Ensemble and numerous other Greek, Near Eastern and Jazz-inspired ensembles for over a decade, Megan Gould and Mavrothi Kontanis have forged a strong musical bond. Whether performing a traditional Greek or Turkish tune, an original composition, or supporting each other’s heartfelt improvisations, this duo makes the most of each note… some of which you just can’t play on a piano…

Mavrothi Kontanis (oud, voice): Mavrothi is a multi-instrumentalist, singer, composer and teacher born and raised in the US, but with roots in Halkidiki, Greece. Mavrothi’s main instrument is the oud, though guitar, baglamas and bouzouki are also often in the mix. Mavrothi has performed throughout the United States, Europe, and the Middle East, can be heard on numerous recordings and movie soundtracks, and is the leader and founding member of both the Maeandros Ensemble and Mild Mannered Rebel. When not performing with various groups in the NY/NJ area, Mavrothi teaches music at Elliott Street Elementary in Newark, NJ.

Megan Gould (violin): Megan Gould is one of NYC’s most versatile performers of Middle Eastern, Greek and popular music. Her comfort within a wide range of styles, her responsiveness to other musicians on stage, and a soulful improvisational style make Megan a sought-after element in many musical projects. She has performed onstage with popular artists such as David Byrne, Natalie Merchant, and John Mellencamp, and her work has appeared on recordings and film soundtracks for artists including Lou Reed, Philip Glass and Metallica. She has performed with notable Greek musicians Alkistis Protopsaltis, Kostas Makedonas, and Mario Frangoulis, and with renowned composer Giannis Markopoulos. While taking on a significant amount of freelance work, her ongoing positions include Assistant Music Director of the NY Arabic Orchestra under Lebanese master musician Bassam Saba, a violinist in Natalie Merchant’s touring ensemble, violinist and baglama player in the popular Greek ensemble Mikrokosmos, and a member of the National Arabic Orchestra in Detroit, Michigan.

“These aren’t musty re-creations… the arrangements are lively, the performances are vigorous, and Kontanis’ singing glows with soulfulness and sorrow.” –Peter Margasak, Chicago Reader

“The Barbes website billed them as ‘probably the best Greek ensemble around,’ high praise from a generally reliable source. For once, putting cynicism on hold paid off: Mavrothi Kontanis and his spectacular backup band are the real deal… Megan Gould provided eerie sheets of sound on violin…get to know this amazing band.” –Lucid Culture
Maeandros Ensemble