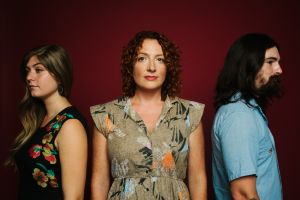 As Locust Honey, Chloe Edmonstone and Meredith Watson bring their experience in old-time, bluegrass, and pre-war blues to both their original material and the traditional songs and tunes of the American Southeast. With a rotating instrumentation of fiddles, open-back and resonator banjos, acoustic and resonator guitars, they set an emphasis on lively arrangements that showcase their signature vintage vocal harmonies. Joined by John Miller (of The Fox Hunt and The Hackensaw Boys) on upright bass, they have been touring the US, UK and Ireland since 2012.

Their original song, “When The Whiskey’s Gone”, was featured in the 2014 film Time Out of Mind, starring Richard Gere and directed by Oren Moverman, and a second unreleased original was included in the 2016 film The Dinner, by the same writer/director. Locust Honey’s record Never Let Me Cross Your Mind debuted to critical acclaim in 2014, and remained in the top ten on the Folk DJ Charts for 4 months. Subsequently released in the UK and Ireland, it was chosen as one of the best country albums of 2016 by The Telegraph in London.

“Their intuitive playing takes the feel of a song, maintains it, and at the same time turns it into a Locust Honey song. The results are warm, emotional, and, at times, heartbreaking.” –Pop Matters

“Their new album is in heavy rotation here in the Hudson Valley farm house, fitting in right along with all those killer 78s from Yazoo. Grab yourself a copy and put on your dancing shoes.” –No Depression