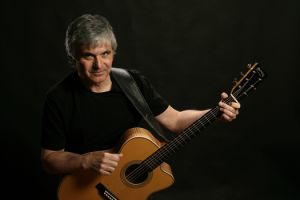 Fusing folk, jazz, pop and classical styles, Laurence Juber creates a multi-faceted performance that belies the use of only one instrument. The former lead guitarist for Paul McCartney’s band Wings, Juber is a world-class guitar virtuoso solo artist, composer and arranger.

Laurence Juber has released 18 critically acclaimed solo albums, including Guitarist and PCH. His solo CD, Pop Goes Guitar, includes the arrangement of “Stand By Me” that was heard nationally in the “Diamonds Are Forever” commercial. His last release, Wooden Horses, showcases Juber’s compositions for solo guitar, and his brand new CD is a volume 2 follow-up to “LJ Plays The Beatles”, which is one of Acoustic Guitar Magazine’s’ all-time Top Ten acoustic albums.

Juber is featured on the CD Poppin’ Guitars, a tribute to the music of the Sherman Brothers, and can be seen in the documentary film, The Brothers, about those celebrated Disney composers.

As a studio musician, his playing can be currently heard on ABC Family channel’s hit show “The Secret Life of the American Teenager”. Juber has also co-composed the soundtrack of the upcoming Blizzard Entertainment video game “Diablo 3” and crafted the score to the recent NBC Dateline documentary “Children of the Harvest. His music is also featured in the Ken Burns documentary “The Tenth Inning”.