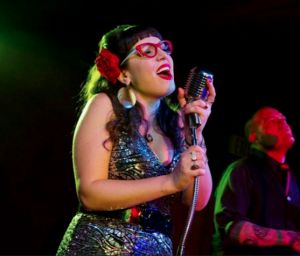 Named the “Best Up-and-Coming Band” by Hudson Valley Magazine, and nominated for “Best Rockabilly Female” at the 2016 Ameripolitan Music Awards, Lara Hope and the Ark-Tones are NY’s premier Rockabilly, Roots Rock n’ Roll, Rhythm & Blues outfit. With the release of their fully crowd-funded debut album, Luck Maker, a music video for their single “Whiskey Pick” (official selection of the Woodstock Film Festival, and in WDST’s top 100 songs), and a relentless performance and touring schedule, it has proven to be an exciting time for the Ark-Tones.

Born from a hybrid of Lara’s former Rockabilly band The Champtones, and upright bassist Matt’s international Psychobilly act The Arkhams, The Ark-Tones hit the ground running in 2012. This fun-loving bunch packs the dance floor with their own original musical offerings in the vintage style, as well as re-workings of classics and standards. This “travelin’ band” is out there pleasing listeners of all ages and walks of life… wherever they roam.

“Some retro acts reference old styles with a postmodern wink; others inhabit them as if the last 50 years had failed to transpire. Lara Hope and the Ark-Tones somehow manage to do both.” –John Burdick, Hudson Valley Almanac (Nov 30, 2014)