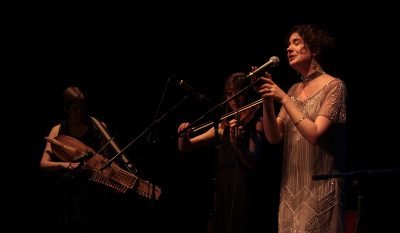 Kyle Carey’s unique fusion of ‘Gaelic Americana’ music includes influences of the American Folk Anthology and the traditional music of Cape Breton, Ireland and Scotland. Kyle’s third and newest album, The Art of Forgetting, produced by Dirk Powell, recorded in Louisiana, and featuring luminaries such as Rhiannon Giddens, John McCusker and Mike McGoldrick, was just released in January on Riverboat Records.

Once a full-time waitress at the folk world’s treasured Café Lena, Kyle traveled to Cape Breton, Nova Scotia after college on a Fulbright Fellowship to study Celtic music and the Scottish Gaelic language. Following that, she spent a year on the Isle of Skye in Scotland, where she studied Scottish Gaelic intensively with Christine Primrose of the Isle of Lewis, learning the language to the point of fluency, along with the secrets of tone and delivery that distinguish such singers in the tradition.

Kyle traveled to Ireland to record her debut album MONONGAH — a collection of originals that featured an all-star line-up of Irish musicians. Her sophomore album, NORTH STAR, recorded in Scotland, was produced by Seamus Egan, and incorporated yet another stellar cast of Scotland and North America’s finest.

Kyle has been touring both nationally and internationally for the past five years — winning hearts, and re-telling the history of American folk on both sides of the Atlantic.