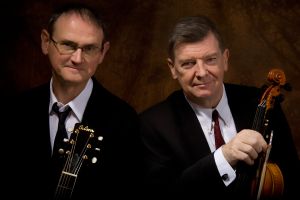 Renowned Irish fiddler Kevin Burke has teamed up with American guitarist Cal Scott for an exciting new collaboration in traditional music. Their debut CD Across the Black River was the premier release on Kevin’s new label Loftus Music, and was named a “top notable world music release” by The New York Times.

“The royalty of England and Ireland didn’t live in castles or ride white horses. They sat in the pubs with their fiddles and guitars, sipping the ale, and making life pretty damn tolerable for the town folk. In this tradition we salute these noble men: Kevin Burke and Cal Scott.” –Cafe Guide

“Born in England to Irish parents and now living in Portland, Ore., Kevin Burke is one of the great living Celtic fiddlers. His first album on his own label is a collaboration with the self-effacing guitarist Cal Scott and various guests that’s cozy and mature, full of modest tributes to fellow fiddlers. It’s all straightforward, songful melody, until Mr. Burke gets to a set of reels that show how many trills, twists and curlicues he can add without losing that singing line.” –Jon Pareles for The New York Times, about Burke and Scott’s debut CD.
Kevin Burke