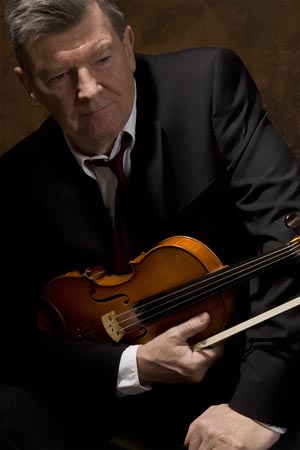 Kevin Burke’s fiddle playing has been at the forefront of traditional music for over 30 years. Whether solo or accompanied, on record or in concert, Burke is an immensely engaging performer. He has been established as a first class musician ever since his work in the early 1970s (with such renowned performers as Arlo Guthrie, Christy Moore and the Bothy Band and with his far-reaching solo album, “If the Cap Fits”). During his long musical career Kevin has earned international acclaim in both Europe and America as a solo performer, a teacher and as a member of some of folk music’s foremost groups including Celtic Fiddle Festival, and Patrick Street. He is also a featured member of Grammy winner Tim O’Brien’s wonderful crossover band, The Crossing.

Kevin’s contribution to music was acknowledged by The National Endowment for the Arts when he was awarded a National Heritage Fellowship, the USA ‘s highest honor for excellence in the folk and traditional arts. Previous National Heritage Fellows include B.B. King, Doc Watson, and Bill Monroe. 2010 saw Kevin’s induction to the Oregon Music Hall of Fame. He was very honored to receive such a tribute from his adopted home state.

Although Kevin has spent much of his life playing in a group context, he has never lost his love for solo fiddle music – the “naked fiddle” as he himself sometimes puts it. This is very evident in his live solo release, “In Concert”, a performance of mostly unaccompanied traditional pieces.

“Lyric, fluid and precisely as tricky as he needs to be…probably the greatest Irish fiddler living.” –The Village Voice

“Kevin Burke plays the fiddle so smoothly, with such buoyancy, and with such relaxed showmanship, that even a large concert hall becomes intimate.” –The New Yorker