Jungle Johnny and the Fabulon 500 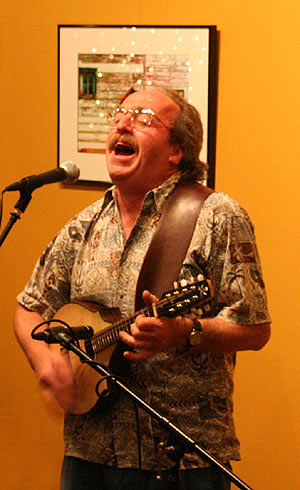 John Wirtz is the kind of musician you would find in the steppes of Mongolia, or the remote forests of Papua New Guinea, or the lush rainforests of Bolivia. None of the well-seasoned musicians from those regions could tell you what a F# diminished chord sounds like, and neither can John. But what they have in common is a level of commitment to each sound, each note, each moment, that is hard to find in the modern world. John commits and makes you feel what he feels. He is raw and exuberant.

As a founding member of the Fighting McKenzies, John Wirtz was the Yosemite Sam of this wild collective of musical miscreants, not averse to wild costumage and near-religious outbursts. Post-McKenzies John took on the persona of one “Lucky Timson”, a hobo who was said to live in a shack in the marshes of the Hackensack River. Lucky’s only official recording was the box set, Twenty Pound Blues. You would soil yourself if you were lucky enough to hear this recording.

John also served as the host of Singer-Songwriter Tuesdays at the Rosendale Cafe from 2007-2008, where at the end of the night, he might pull out a song from his extensive repertoire of traditional American songs.

John isn’t able to play mandolin or guitar anymore due to his brain’s lack of communication to his limbs, due to what Western doctors call a “brain tumor”. But John is happy to belt out some of his own remarkable songs, and entrust his old comrades to move their fingers for him. These include Wayne Montecalvo, John Hughes, Dean Jones, Mark Brown, and Warren Perrins.

Don’t miss this rare treat of the legendary John Wirtz.

Please note this event starts an hour earlier than our usual time.