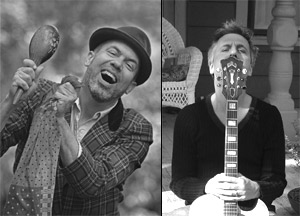 John Hughes is host of the Cafe’s Singer-Songwriter Tuesday series, of Dog on Fleas fame, Bedtime Kissers, Duty Shirkers, and formerly of the Fighting Mckenzies, Uncle Buckle, and FSBOO, and is a powerful musician / performer in his own right.

John will now present a tasting tray of songs from any era, including the future. With original gems and choice dandies you might even sing along to, expect the unexpected, a thoughtful repartee and genuine good humor. Let John entertain you and jump up your January a bit.

Ken McGloin (musician, composer, producer, teacher) is one of the region’s true all-stars. As Face The Music’s musical director, guitarist, and producer; Ken has performed widely in the US and abroad. He has performed and/or recorded with Hudson Valley Legends: Mark Brown, Amy Fradon, Garth Hudson, Artie Traum, Dean Sharp, Dean Jones, jazz luminaries Hank Crawford, Ira Coleman, and Down beat award winner Dave Douglas. Ken’s band Lunchmeat (Continuum Records) played the main stage at the 1994 Woodstock Festival. Ken has written music for MTV’s The Real World and Road Rules. He is a much sought-after guitarist and music director, and John was really lucky to get him for this enchanted evening! …plus they love playing together…

This show was originally scheduled for October 29th, but canceled due to a snowstorm.

“A consummate showman, songwriter, picker / and disseminator of good will; none other than John P. Hughes.” –Cafe Guide