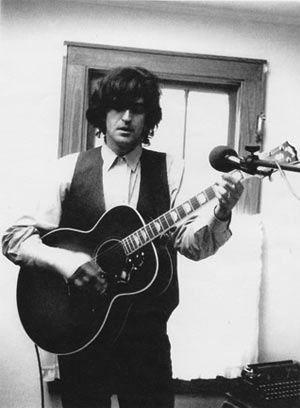 Born in Jackson Heights, Queens, New York, John discovered music early on in life, and immediately began immersing himself in it. He discovered the work of Django Reinhardt and the great classical composers, who were his major inspirations for taking up the guitar. John was asked to join up with an early guitar hero, Danny Kalb of Blues Project fame, to record on an anthology album for Columbia Records with veteran guitar greats Eric Clapton, B.B. King, Roy Buchanan, Johnny Winter, Santana and Chuck Berry. A watershed experience was a tour of the United States, which also included Eric Burden and the Animals, and Commander Cody and the Lost Planet Airmen.

Back in New York John played on the C.B.G.B. scene, the epicenter of the Rock n’ Roll renaissance, with Patti Smith, Television, Mink Deville and The Talking Heads. Later on, Willy Deville remembering the impact of John’s commanding performance when they jammed at the C.B.G.B. club, asked him to fill Mark Knopfler’s role on the Miracle Tour of Europe (1988-1989). Together they played throughout Paris, Germany, Belgium and Switzerland.

His 1977 45 rpm record, “Vice Verses”, (written to, for and about Miles Davis) is now a valuable collector’s item, and is still played on many radio stations in Europe and Scandinavia. The press notices for Berenzy’s performances and subsequent album The Final Resolve were extremely favorable. A remastered “Vice Verses” can also be found on his Far Cry anthology CD.