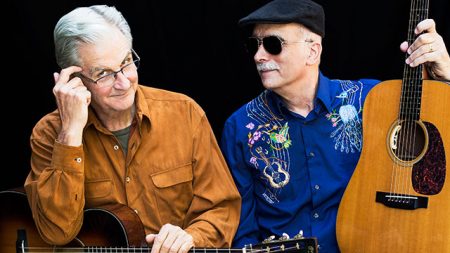 There are gates to the city of American roots music, entryways that lead in new generations every decade. One of these gates is the Grateful Dead, whose love of folk and roots music has led many younger fans back to the source. But what gates did the Dead themselves use to come to the city? The answer lies with Jim Kweskin and the Jug Band, whose rough-and-tumble roots music in the 1960s directly inspired countless bands like The Lovin’ Spoonful, Country Joe and the Fish, and The Dead via Bob Weir. Kweskin and the Jug Band’s popularity nationally during this time brought them performances on The Tonight Show, The Merv Griffin Show, and The Steve Allen Show, and stages from Carnegie Hall to the Fillmore Ballrooms; they were even managed by Albert Grossman, the same manager as Bob Dylan, The Band, and Peter Paul & Mary. In the early 1960s, Jim Kweskin and musical partner Geoff Muldaur (Maria Muldaur too and the other great musicians in the jug band) bounced between the Boston and New York folk scene, hanging out with Dylan or Mississippi John Hurt at the Newport Folk Festival during the four years they performed there in a row. Later in the 60s, they were at the summer of love in San Francisco, sharing stages with The Doors and having Janis Joplin with Big Brother and the Holding Company open for them. Together, they and other luminaries of the folk world in the 1960s dived into the jug band and country blues repertoire of early American music, riffing and playing with old themes and musical techniques, like Elizabeth Cotton’s guitar picking or Gus Cannon’s hokum ribaldry. When you hear the LPs they cut for labels Vanguard Records and Warner/Reprise at the time, you may be surprised to hear not swirling psychedelia, but hardcore old-time country roots and blues music from the American tradition, played with a raw-edged, frenetic energy that was impossible to resist. What compelled people to join the Jim Kweskin and Geoff Muldaur jug band revolution in the 60s was not some spaced-out trippiness, but an even more subversive idea – that the roots of American music might already hold some of the wildest, craziest, most fun music ever made. It took these two guys and their friends from New England to find this out for their generation, but it’s a lesson that resonates even today.

Now, just over 50 years since Jim Kweskin and Geoff Muldaur first joined up, they’re back together with a brand-new album on Kingswood Records (Kaia Kater, Michaela Anne). Penny’s Farm, set for release September 23, 2016, is a laid-back romp through some of Jim and Geoff’s favorite roots songs. There joined here by some world-class musician friends, like pioneering steel guitarist and dobroist Cindy Cashdollar, blues fiddler Suzy Thompson, renowned composer Van Dyke Parks, and vocalist Juli Crockett (The Evangenitals). If there’s a humbleness to the music, a kind of delightful restraint, that’s because they’re trying to prove a point. It’s the same point Jim and Geoff started out to prove: that the music of the past has as much meaning today as it ever did. As Jim says, “We’re hoping that this album and our subsequent performances at folk festivals will help to remind people that folk music has a rich and deep history. And our music is still relevant in this world of technology. We believe that music from the heart is always relevant.” Learning that music made from the heart is timeless is the kind of wisdom that Jim and Geoff first learned at the feet of the old masters, and it’s something they’d like to pass on now. But this isn’t some dour recreation; with this new album they prove that they’re still having as much fun as ever. And anyways, the key to Jim Kweskin and Geoff Muldaur’s music has always been their ability to interpret the raucous back-alley and front-porch jams of yesterday into something we can all sing along to. Try to keep from joining in on “Diamond Joe,” or tapping along to “Down on Penny’s Farm,” or even wiping away a tear at the sad story of “Louis Collins; you can’t. This is music made to be shared. To be passed on. To last.

Two legends of American folk music have reunited for their first album together since the 60s. Jim Kweskin and Geoff Muldaur were original members of the Jim Kweskin Jug Band, a band so important that they directly inspired The Grateful Dead (via Bob Weir), The Lovin' Spoonful, Country Joe & The Fish, heck Janis Joplin opened up for them in San Francisco during the summer of love.