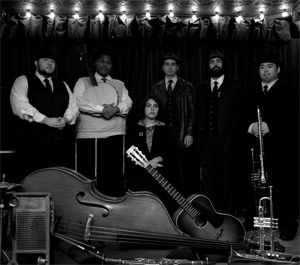 Jessy Carolina & The Hot Mess is a New York City based traditional jazz band. The group, formerly known as the Bill Murray Experience, formed in 2008. Over the years, the band has performed throughout the East coast and has participated in many organizations including The Jazz Foundation of America, Music Under New York, Music That Heals, Healing Arts Initiative, and Make Music New York. Early on, the band was featured on The Simpson’s 20th Anniversary Special and most recently, Jessy Carolina’s musical performances were featured in the video game Bioshock Infinite. In 2012, the band traveled overseas and performed in Germany, Denmark, Israel, and Romania.