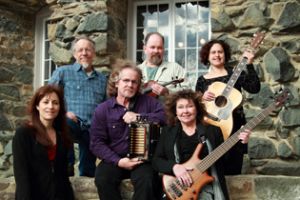 Jesse Lege is one of the most admired Cajun accordionists and vocalists from Southwest Louisiana. Beginning with Cajun accordion at age 16, Jesse has been playing traditional Cajun music for over 40 years with a variety of bands in various Louisiana dancehalls and at various Northeast, national, and international festivals, dance camps, and other venues.

His ensemble includes (in front row of the photo) Rose Sinclair on steel guitar; Jesse himself on accordion and vocals; Evie Schneider on five-string bass; (back row) Gary Graeff on drums; Darren Wallace on fiddle and electric guitar; and Erica Weiss on guitar and vocals.

Lege has garnered numerous Cajun French Music Association awards, known as the “Cajun Grammys.” These include Traditional Band of the Year, Accordion Player of the Year, Male Vocalist of the Year, Band of the Year, and for “Memoires Dans Mon Coeur” he won Song of the Year. He has recorded five CDs with the Lake Charles Ramblers; with the Southern Ramblers; with Creole fiddler Ed Poullard, Live at the Isleton Crawdad Festival; with Joel Savoy and Bayou Brew, Live at Glenn Echo; and with Joel Savoy and Lindsay Young, Jesse Lege for a European tour. Jesse has played many Cajun events in Louisiana and elsewhere in the U.S. and world, including Festivals Acadiens, the New Orleans Jazz and Heritage Festival, the Black Pot Festival, and the prestigious Chicago Folk Festival and Newport Folk Festival, Strawberry Park Festival, Crawfish Festival, and other major festivals in CA and FL, Canada, England, and France.

“Jesse sings in the traditional high pitched, emotional style reminiscent of the late Iry LeJeune… and plays the accordion with equal power and conviction…” –Arhoolie Records