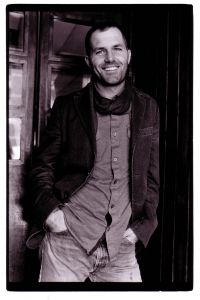 Holed up in Iowa City for the coldest week of the year, Jeffrey Foucault teamed with legendary blues guitar player and producer Bo Ramsey (Greg Brown, Lucinda Williams) to create Ghost Repeater, a country and blues album at the crossroads between love and lament, exploring the hopefulness of new love and the seasickness of contemporary American living.

Ghost repeaters are empty radio stations scattered around the country to re-broadcast demographically tailored playlists, endless echoes of American market culture, from thousands of miles away. Epidemic sameness, big-box stores, and the retail news cycle of ghost prisoners and God on Our Side create the context in which the songs on Ghost Repeater unfold a story of love and uncertainty.

Written over the course of a year in which Foucault married, Ghost Repeater juxtaposes a personal narrative of hope and joyfulness against the wider story of the times, in a series of travelogues and dreamscapes. Words like bloom and fade, truth and mercy, dream and memory recur through the album to create a sort of grammar, a palette of colors that Foucault and Ramsey merge with dark washes of electric guitar and vocals hushed or plaintive, in a visionary portrait of modern Americana.

Slated for a European release in April and a stateside release in May, Ghost Repeater features full band arrangements but hews close to the line of Foucault’s previous albums (Miles from the Lightning, 2001, and Stripping Cane, 2004), with darkly intimate songs and rich language, framed this time around by Bo Ramsey’s signature electric guitar work in a series of country rockers and dark blues. It was a natural progression for Foucault – whose first two records explored the landscape and characters of his native Midwest in spare and largely acoustic terms – to broaden the focus of the music and the subject matter by incorporating a rhythm section and training his sights on not only the intimate but the wider world, the personal and the profound.

Against the broadcast echoes of an America long gone, Foucault lays out the particulars of love in a country contending with its own ghost. In songs of love and empire, dream and memory, Ghost Repeater delivers the honesty of country, the rawboned desperation of blues, and the simplicity of folk to achieve a document that’s timeless and poignant.

“An album full of gravelly, gorgeously rolling poems about weather, trains, and love.” –The New Yorker