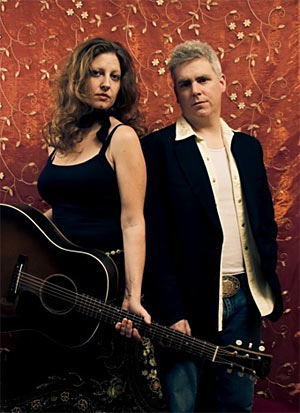 Jeff and Vida’s nine years of performing and songwriting have seen them delve into many different genres of music; country, honky-tonk, rockabilly, and even a little rock and roll. But throughout their career, which has included four critically acclaimed albums, literally thousands of live shows in the U.S. and Europe, and a move from New Orleans to Nashville, bluegrass has remained a key influence in their style and sound. Nowhere is this more evident than on their new CD, Selma Chalk.

The new record features thirteen original songs, a stellar band, and an enigmatic name. Inside the CD jacket, “selma chalk” is defined as “an impurity in the most fertile soil of the South”. Intentional or not, the title seems an apt metaphor for the music contained within… an outsiders’ take on fertile traditions of Southern and Appalachian string band music. Indeed, a number of tracks do fit neatly into what might be called a “traditional bluegrass” sound. More often than not, however, the record bends bluegrass instrumentation around material that’s a little edgier, a little bluesier, and a little rougher than your typical bluegrass album.

While past projects have showcased the duo’s ability to move between genres with ease, incorporating a variety of instrumentation and sounds, their latest effort is more sonically centered. With an impressive group of musicians, Jeff and Vida create a sound that combines the raw intensity and high lonesomeness of bluegrass, with a diverse palette of influences. Their combination of incisive songwriting, high energy arrangements, and gritty vocals stand out from much of contemporary string band music.

“Jeff and Vida make music that is real and true. Theirs are the songs you long to hear late at night on the interstate, in poolhalls and smoky whiskey bars.” –New York Times Magazine