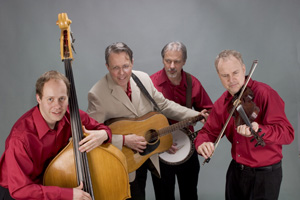 James Reams formed The Barnstormers in 1993. Coming from a family of traditional singers in southeastern Kentucky, James has played both old-time and bluegrass music since he was just a little sprout. James is known as an “ambassador of Bluegrass” for his dedication to, and deep involvement in, the thriving bluegrass and Americana music community. To date, he has released eight CDs including a special DVD documentary of the band. His original songs (alone and co-written with Tina Aridas) are important additions to the bluegrass repertoire, keeping this tradition alive with contemporary issues and new sounds. His guitar playing was highlighted in Flatpicking Guitar Magazine‘s “Masters of Rhythm Guitar” column. James is also the organizer of the Park Slope Bluegrass Oldtime Music Jamboree, an annual music festival he started in 1998, that attracts musicians and fans of traditional music to its workshops, jamming, and concerts… the only event of its kind in or around New York City.

Mark Farrell, like James, is no stranger to bluegrass and old-time country music, having played and recorded for many years with a number of bluegrass and old-time string bands, including Major Contay & The Canebrake Rattlers. He also contributes his great arranging talent to many of the band’s recordings. His great hoedown fiddling and edgy mandolin playing (as well as his sometimes unpredictable humor) earns him friends wherever he goes.

Doug Nicolaisen has been playing banjo with bluegrass bands in the NY tri-state area for over 17 years. His music incorporates many of the best elements of all the major banjo players, yet his style reflects an individuality of its own, and adds to the hard-driving energy of the band.

Nick Sullivan has been playing bass since he was a tot. Back in the northern woods of Wisconsin, he started playing 1950s rock and roll when he was 12, and has covered lots of musical terrain since that time, from ragtime jazz and West African traditional music, to early country music and bluegrass. He adds rock-solid bass and great singing to the Barnstormers’ sound.