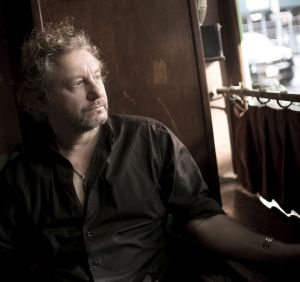 James Maddock’s status as a fixture on the Folk and Americana scene is confirmed with every listen of any song in his prodigious catalog. Relix Magazine put it this way: “James Maddock possesses the kind of lived-in craggy voice that would sound authoritative if he were singing the sports pages. Fortunately, he doesn’t need to do that because his compositional skills are a match for his delivery.”

After fronting the Columbia Records band Wood, whose debut “Songs From Stamford Hill” was featured prominently on TV shows such as Dawson’s Creek, Maddock moved from England to New York City in 2003. His 2009 album Sunrise on Avenue C won a New York Music Award for Best Americana Album, while the follow-up Wake Up and Dream ranked among the top albums of 2011 in WFUV’s (NYC) Listener Poll. With the release of Another Life (2013) and The Green (2015), Maddock continued to demonstrate why many consider him to be one of the best singer/songwriters working today. He has performed with Bruce Springsteen, Willie Nile, Aaron Comess (Spin Doctors) and David Immergluck (Counting Crows). According to radio legend Vin Scelsa, Maddock’s “heartbreakingly beautiful and exquisitely crafted” music “touches the soul.” As a songwriter, James recently had three songs co-written with Mike Scott on the new Waterboys album “Modern Blues” (which appeared in the Top 50 on the UK Albums Chart), a co-write with Gary Barlow (“Actress”) on Barlow’s new album (2X Platinum), as well as a cut (“Fragile”) on the Dirt on My Tongue album by emerging UK artist Jo Harman. Songs from Another Life have been featured on NBC’s Parenthood and ABC Family’s Switched at Birth. Maddock is a constant live presence in the U.S. and Europe. His new full-length studio album, Insanity vs. Humanity, recorded in Brooklyn with his touring band, was released on September 15, 2017. For up-to-date news and concert schedule, log on to http://www.jamesmaddock.net.

Local culture magazine Chronogram has a preview article and video about this performance: https://www.chronogram.com/DailyDose/archives/2017/12/21/james-maddock-sings-in-rosendale-on-saturday

“8 out of 10 stars…one of those rare singular voices that stands apart – a combination of his trademark honeyed rasp, British accent, gift for melody, and weathered warmth… a compelling storyteller.” –Glide Magazine