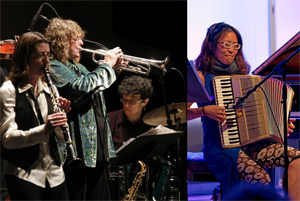 NYC-based Isle of Klezbos approaches tradition with irreverence and respect. The soulful, fun-loving all-women’s klezmer powerhouse has toured from Vienna to Vancouver since 1998. Band repertoire ranges from rambunctious to entrancing: neo-traditional folk dance, mystical melodies, Yiddish swing and retro tango, late Soviet-era Jewish drinking song, re-grooved standards, and genre-defying originals. The band’s concert footage has been broadcast internationally on CBS Sunday Morning, CNN World-Beat, and PBS In The Life, and their live and studio recordings have also been heard on The L Word (Showtime), WFMU, Northeast Public Radio (Live at the Linda), and film soundtracks for Grace Paley: Collected Shorts, Esther Broner: A Weave of Women, and I Guess I’m Not Going to Get to Vegas, among others. The band has also been commissioned to
work with singer/songwriter Jill Sobule’s original “Music from Yentl” project; and to create a concert for artist Kiki Smith and studio recordings of Klezbos arrangements for multi-platinum, Grammy-nominated, Scissor Sisters.

Performing at the Cafe will be the Isle of Klezbos quartet special. This incarnation features Debra Kreisberg on clarinet and alto saxophone, Pam Fleming and trumpet and flugelhorn, Shoko Nagai on accordion, and Eve Sicular on drums (and as bandleader).

“These women will make you shake your tushies!” –Village Voice