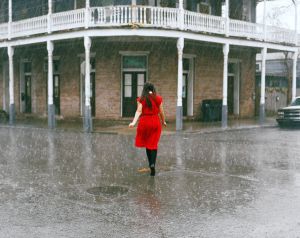 Based out of New York City, Holy Crow Jazz Band performs traditional American jazz music from the 1920s throughout the 1930s. The band’s repertoire includes many instrumental pieces that were written, or made popular by, great musicians of the past… such as King Oliver, Kid Ory, Bix Beiderbecke, and Red Nichols, just to name a few.

Like a roaring freight train to cooing dove, lead vocals by Jessy Carolina (recently featured in the internationally acclaimed video game BioShock Infinite) sound as if they’re coming out of an old Victrola on a worn 78 record. She also plays a mean washboard!

The band’s stompy and lively sound can be attributed to its heavy horns and solid rhythm section led by Carolina’s husband, Mario J. Maggio (clarinet and tenor saxophone). On trumpet, and occasional singer of a song or two, is the vivacious and entertaining Jesse Selengut. “Tuba Joe” Exley moves bodies out of seats and Adam Brisbin mesmerizes audiences with his resonator guitar.

Holy Crow Jazz Band transports audience members back through the times of feel-good Prohibition era speakeasies, where people were untroubled by consequence, and hardships of the Depression era, when music seemed to be the only cure for sorrow and loss.

“I run a movie theater, so I pick about 100 films each year to play in New York City, but one of the best things I’ve ever done to entertain my audiences was to ask Jessy Carolina to come play guitar between shows on big weekends at IFC Center. Watching unsuspecting moviegoers walk into the theater on a Friday night and realize that they’re being treated to a real live folk music show is a real pleasure. Jessy is a great musician and perhaps more important, as a student of folk and blues from the pre-war era, she’s helping keep great music from the last century alive today.” –John Vanco, IFC Center Vice President

“Generally speaking, roots musicians aren’t great at jazz, and jazz players don’t do roots music so well. These guys have no problem doing both. But pulling this all together and taking it several flying leaps higher, is the vocalist, Jessy Carolina. She doesn’t sing songs as much as she embodies them. Her singing and moves are both about as good as it gets. A friend I brought to see the band said the only problem he had was that he would get so caught up in Jessy’s singing that he had trouble paying attention to her performing, then he’d immediately get so caught up in watching her, he would forget about the song, back and forth, back and forth. But all the while, he said, ‘I couldn’t take my eyes off her’.” –Peter Stampfel, The Holy Modal Rounders

“Jessy Carolina has a fresh lively approach to old time jazz and popular music, Jessy will sing it right to your heart and the band will keep you dancing.” –Eli Smith, Down Home Radio Show

“Jessy Carolina’s voice touches your soul the second you hear it! If Louis Armstrong and Ella Fitzgerald had a child together, it could not be more talented.” –Christof Bergman, Composer and Metropolitan Opera affiliate