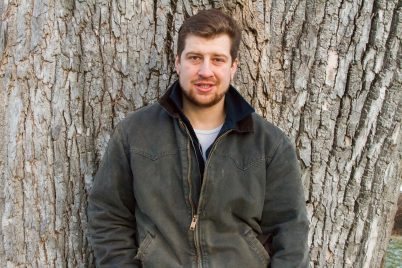 Greg Farley was born in Highland, NY, a small town on the Hudson River. His dad was a teamster who drove tractor trailers and his mom worked at the A&P. In 2006 he began touring out of his car playing house shows, small bars, and on the street, burning CDs, wrapping them in road maps, stamping GF on the front. From the east coast to California and back, he saw landscapes and cities that most of the people he grew up with never got the chance to see. Upon returning he was lent a fiddle by a good friend, took up learning some old time, and joined The Felice Brothers. He played with them for the next ten years, working other jobs in his down time: He mucked stalls on a horse farm, waited tables at a vegetarian restaurant, worked as a carpenter, arborist, woodworker, and sawmill operator, Through it all, his music was the only constant. Now, striking out on his own with his debut LP Taker Easy , recorded in Stanfordville, NY with producer/engineer Nick Kinsey, he mines his own history for stories of class struggle, nature, love, pain, work, and family, all set against the backdrop of the northeast. End of the day, Farley has nothing to lose and something to say, and he’s saying it from the gut.

Coverage from WAMC:
Greg Farley Is Bound To Try: Egremont Barn On 7/27 And Solo Album In The Fall

Coverage from the Poughkeepsie Journal
From The Felice Brothers, Greg Farley steps out on his own with ‘Taker Easy’

Greg Farley is a blue collar folk singer in the tradition of Guthrie and Dylan. His songs are rough cut, hand-hewn, and tumbled hard. They strike the ear like truth and glow like cottage windows way out in a dark field. Greg’s music is union made and 100% American in the best sense of the word. It speaks to country fans, knowledgeable listeners, waitresses, factory workers, or nurses, and even lawyers, driving home in need of some good musical nourishment. Farley is the kind of original who’s never going to be corrupted by slick producers or record deals--no gross packaging for this guy. He is the real deal, and it’s already happening for him. Sounds like he just might be Bruce Springsteen’s spiritual nephew. You go, Greg, and we’ll go with you.
--Cafe Guide