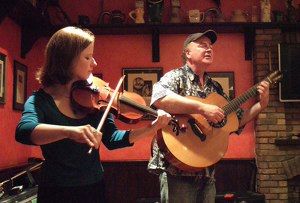 A native of Ennis, Co. Clare, Gerry O’Beirne is known for his much-covered original songs, innovative guitar tunings, and prowess on a variety of stringed instruments, including 12-string guitar, National Steel guitar, and ukulele. O’Beirne’s recent instrumental album, The Bog Bodies and Other Stories, was hailed as “one of the most perfect acoustic albums I’ve heard” by NPR’s John Diliberto.

Rosie Shipley has been playing the fiddle since she was three years old. She learned her first Irish tunes at age eight from master fiddler Brendan Mulvihill in Baltimore, MD. As a teenager, Rosie attended the Gaelic College of Celtic Arts and Crafts on Cape Breton Island, Nova Scotia, where she became well versed in Cape Breton-style fiddling. Her recording with singer Lisa Moscatiello was described as “achingly beautiful” by The Washington Times.

Together, O’Beirne and Shipley perform traditional music from Ireland and North America as well as O’Beirne’s original compositions and songs. Please join us for an evening with a duo that reviewers have called “an unstoppable and potently creative force.”
Gerry O’Beirne