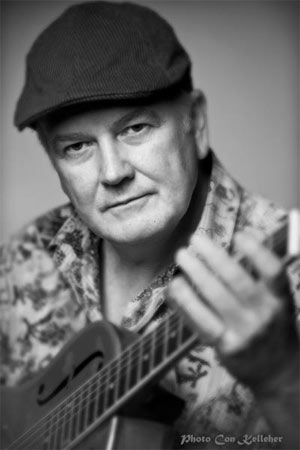 Born in Ennis, County Clare, along Ireland’s music-rich west coast, Gerry O’Beirne is a renowned singer, songwriter, and multi-instrumentalist (6 and 12 string guitar, tiple, and ukulele, slide guitar among others). He grew up in Ireland and in Ghana in West Africa, and has since lived in England, California, and Mexico. His own compositions blend the passion found in traditional music with the freshness of contemporary song.

Gerry’s first solo album, Half Moon Bay, featured his own songs and instrumental compositions. Half Moon Bay was cited as one of the 12 best releases of the year by Performing Songwriter magazine and was chosen as one of Folkworld’s top ten albums of the year. His second album The Bog Bodies and Other Stories: Music for Guitar, was named “CD of the Month” on the radio show Echoes, and one of the essential albums of the year on the same show and was featured recently on the Irish TV show Nationwide. His latest album Yesterday I Saw the Earth Beautiful with fiddler Rosie Shipley was described as “an extraordinary album with innovative arrangements and hauntingly beautiful songs.” by Folkworld.

Many of Gerry’s songs have been embraced by the contemporary folk community. Maura O’Connell recorded the O’Beirne songs “Half Moon Bay”, “Western Highway”, “Shades of Gloria”, and “The Isle of Malachy”. Mary Black recorded “The Holy Ground” as a title track. Cathie Ryan recorded “Shades of Gloria” and “The Lights of San Francisco”. Muireann Nic Amhloaibh has recorded “Western Highway” and “The Isle Of Malachy” on her album Daybreak: Fainne an Lae.

Gerry has toured the globe as a solo artist and with the Sharon Shannon Band, Patrick Street, Midnight Well, Andy M. Stewart, Kevin Burke, Andy Irvine, and the Waterboys. He has performed at the White House, opened for the Grateful Dead, and played electric guitar with Marianne Faithfull. He composed and recorded the score to River of Dreams, an artistic response to the River Shannon commissioned by the Irish Department of Arts and Heritage, and he has written music for film and theater.

As a producer, he has a large number of albums to his credit, including Promenade by Kevin Burke and Michael O’Dhomhnaill (winner of the Grand Prix Du Disque at Montreux), Irish Times by Patrick Street, Man in the Moon and Donegal Rain by Andy M. Stewart, First Footing by Anam, The Connaughtman’s Rambles by Martin O’Conner, Up Close by Kevin Burke, Lifting the Veil and Sacred Space by Fiona Joyce, To Anyone at All by Clandestine, Fine Small Storm by Jen Hamel, The Willow by E. J. Jones, Silver Hook Tango by Australian singer-songwriter Kavisha Mazella, When Two Lovers Meet and I Won’t Go Home ’til Morning by Sarah McQuaid, and Lumina by Eoin Duignan (Irish piper, low whistle player, and composer), which was hailed “a stunning achievement” by Hot Press, Ireland’s foremost music magazine.

Gerry has toured in Europe, Australia, New Zealand and the USA, performed solo at the Kennedy Center in Washington DC, and has taught musical composition from visual art at Swananoa Music Camp. He recently played on the new Lunasa and Muireann Nic Amhlaoibh albums and his latest album with fiddler Rosie Shipley has featured in the US Folk DJ Radio Chart.

“The instrumentals are out of this world. A self taught master of the 6 and 12 string guitar, the playing of O’Beirne is superlative and subtle beyond words.” –The Sunday Times